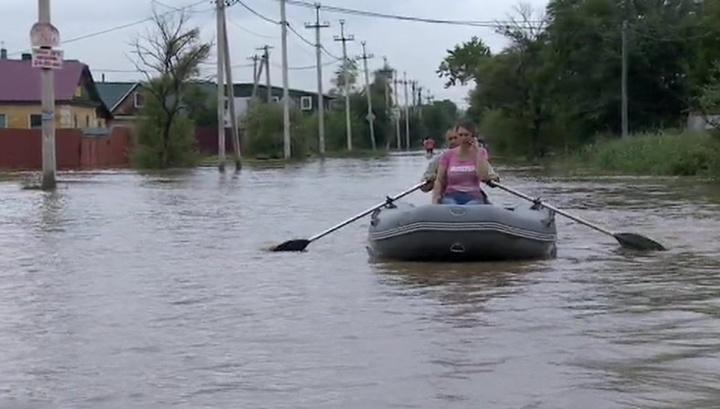 The emergency mode was introduced in Ussuriisk. Last night, as a result of torrential rains, seven settlements were flooded. Thousands of houses are flooded, roads are blurred.

Intensive night and morning rains in Primorye left a devastating trail in the cities and towns of the three regions of Primorye, but the greatest damage to the elements was caused by Ussuriisk. Despite the fact that now there is no rain, many streets of the city can only be driven by trained cars.

Rains in the city went several hours at night and early in the morning, traffic on the roads of the city almost stopped. Hundreds of users of social networks began to upload photos and videos from Ussuriysk stealthily leaving under water.

– The water began to arrive, and after two hours the level already was like that.

Traffic on the roads is now difficult. The city began interruptions with electricity and communications. The authorities of the district introduced a high alert mode three days ago. There was a torrential rain and a gusty wind. Today after the meeting of the commission for emergency situations, officials ask volunteers to help in the fight against the consequences of the disaster. Local residents, who have boats, are asked to join the combined rescue teams.

At night, heavy rain accompanied by squally gusts of the wind, there are reports of fallen trees. It is interesting that the expected typhoon “Nora”, which first came to Japan, went the other way. However, the weather in the province had earlier started to have another whirlwind effect – over the Sea of ​​Okhotsk. Precipitation, according to weather forecasters, collapsed because of the frontal sections formed between the two vortices. That is, the natural cataclysm does not affect the weather in full force, and in fact it is difficult to even imagine what would have happened if the typhoon as such had come to the edge.

Meanwhile, these precipitations seriously violated the urban and regional infrastructure. According to the authorities, the evacuation of people is already beginning. In Ussuriysk, a temporary placement point is being set up, and several more will be opened soon.

“We have installed the pump stations, while the water leaves the city, you saw that a few more hours of water were knee-deep, now the water is leaving,” says Sergei Efremov, first deputy head of the Ussuriysk administration.

In addition to Ussuriysk, the Hasan and Nadezhdin districts suffered. Here, in several places, the Razolnoye highway – Hasan has blurred. According to some reports, about 100 vehicles are blocked, water arrives there, people are evacuated on military equipment. Flooded villages Kravtsovka, Barabash, Zanadvorovka and reindeer herders. Overflows through the roads are noted in Ussuriysk, there is no way to the village of Kronovka.

Although the typhoon does not have a direct effect on the situation in Primorye, weather forecasters give a disappointing forecast: during the day, rains of different intensity are waiting for here, which means that in the near future the water level in the rivers will only rise.