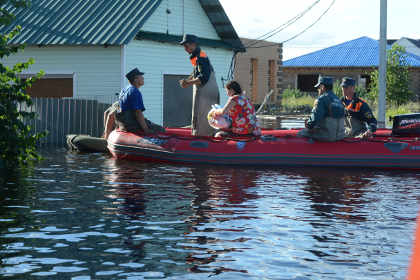 A state of emergency imposed today in the town of Belogorsk in Amur region due to rise of water level in the river Tom’.

“As of Saturday morning, the level of the Tom rose to 426 see During the day, the water arrived at 52 cm In the flooded area of the garden society “between the Rivers”, plots of land and private houses in the waterfront district of Tomi, and the village of Island Bayou,” — said the press service.

“Experts do not rule out another crest of water in nine days. UPRAVLENIE po DELAM GO I CHS monitor the flood situation on the spot. Control of the supply to the territory electricity supply”, — noted in press service. The decision of the head of Belogorsk in the village of Island Bayou organized by the point of free distribution of water and bread to the population. In the administration of Belogorsk began preparation of the regulatory framework on the provision of assistance to victims of flooding.

According to regional GU Ministry of emergency situations, only in the Amur region flooded ten houses, household plots 112 in Romnenskaya and Saw areas in the city of Belogorsk. The water went on the 14 road sections, 300 summer cottages in a garden society “between the Rivers” in the city and a suburban area in Seleindzinski district. Romnenskaya in the area due to river flooding without transport remain a Tar of the village and Roadside. In Seleindzinski area without communication with the “mainland” remains of nine settlements, which are home 4765 people, including 987 children.

A state of emergency due to floods are in Romnenskaya and Saw areas of the region, as well as in Ozerianska the village Council of the Belogorsky area of the Amur region.