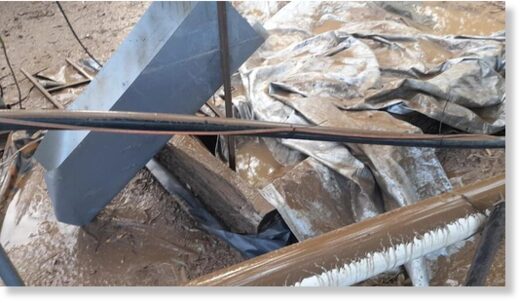 From 8 p.m. to midnight last night, several flash flood warnings were issued for The Gemfields in the Central Highlands of Queensland.

An average of 150 millimeters of rainfall has fallen across the watershed in the past 48 hours, but up to 270 millimeters were recorded in the Teresa Creek area.

Some Rubivale and Sapphire residents evacuated before the alarm was declared, but Mr. Nesbitt did not manage to leave his home until after it was flooded.

The 67-year-old old man was rescued from the roof during a flood in March.

“He lost everything,” said his brother Jim Nesbitt.

“It took him almost all of his time until today to get his life back on track, and the same thing happened.”

Mr. Nesbitt said his brother was “on a knife edge” every time it rained.

“He’s really not feeling well, I had to talk to his friend because Clive was too upset to talk to me,” he said.

“He’s been through this before, mentally he’s beat up.

“He’s a lonely man, he’s got health problems, and this feels like a tipping point.”

In March, the $300,000 early warning system for floods and fires in Sapphire and Graves Hill failed to work.

Mr. Nesbitt said the alarm went off this time, but criticized the timing.

“It did go off, but it went off half an hour later, and it was too late,” he said.

“By then it was completely gone.”

Glenn Bell, coordinator of the Central Highlands Regional Disaster Response Council, said no evacuation center was set up because residents evacuated to friends.

“All residents who might have been affected were called by police ahead of time, and we also declared an emergency,” he said.

Mr. Bell said the system was activated around midnight and worked for an hour.

“We activated the sirens and they worked very, very well,” he said.

“Those that were at risk, and of course [Clive] was warned about it in advance, the sirens were activated the moment it actually broke out.”

“There are several other houses that are below that level, they had already been warned about it and evacuated.

“By the time the sirens came on, some areas were flooded, but they had already been warned in advance.”

Mr. Bell said an emergency alert was issued two and a half hours before the sirens, and police were knocking on doors.

“That’s one of the many tools we use,” he said.

About 30 roads remain closed, and more are expected to be closed as water drains through the watershed.

“We’re doing damage assessments for the infrastructure and the Gemfields area to see what was really damaged and affected and what the future recovery processes are,” he said.

“At this point, given the weather and projected precipitation over the next two weeks, we expect more.”

“We will continue to monitor each of these watersheds and provide public safety advice as needed.”