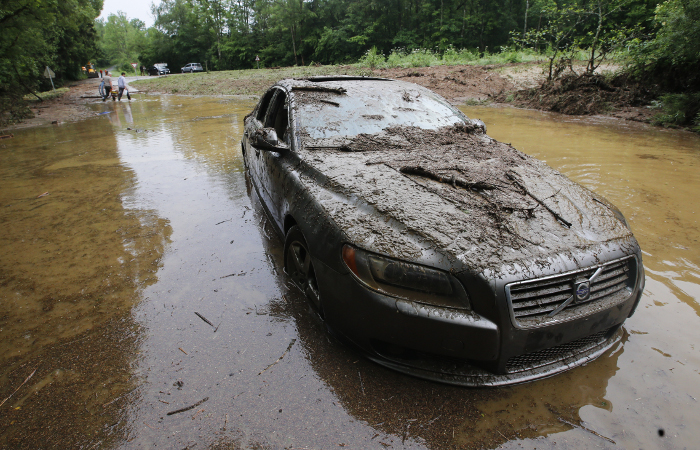 The elements raged in the Belgian provinces of Hainaut, liège, Luxembourg, NAMUR, which was struck by a powerful showers.

In the province of Hainaut, is reported from Belgium, along the border with France flooded over the banks of rivers and streams several villages, inundating them with water almost all the houses. Firefighters were unable to go on calls to pump out water from cellars and basements and flooded roads. Some homes were flooded with mud flows up to a height of half a meter. Water brought earth from the nearby fields. Events developed so rapidly that people did not manage to save anything from your property. Some victims stated that they lost in the disaster all that he had.

A number of local roads closed to traffic indefinitely. The photographs, which were published by the media, is seen as the streets turned into rivers, roads blocked by mudslides, flooded, and overturned cars.

Went to the suburbs of a large city of Charleroi, where he also filled the streets and squares, damaged roofs, falling trees, including on cars.

In the province of liège from thunderstorms and heavy rains particularly affected the city of Verviers, Dizon and Pepinster. In Disone water filled in the entire center, and local police are asking residents not to leave their homes. Motorists urged not to drive into the commune. Water flooded the local TV Studio.

Near the town of Welkenraedt flow washed 7 people, hiding from the weather under a bridge or motorway, when suddenly risen in their place of refuge water has destroyed the whole group. Six managed to escape, but the 80-year-old woman from their group was found drowned. In Welkenraedt the school suffered, water filled the basement and first floor. A group of several dozen parents, students and volunteers began to lead the school building in order.

In the province of Luxembourg, in the town of Durbuy, which is the tourist describes as the smallest city in the world, hail the size of a ball ping-pong. At the end of the day on Monday flooded the center of the city, injured several restaurants. In the cities of Erez, Marche-EN-Famenne and Hamoir firefighters and civil protection took water to the river Ourthe and protect buildings with sandbags. More than any other damage caused to the Hamoir, located at the confluence emerged from the banks of the rivers Ourthe and Nebulon.

In the province of NAMUR particularly affected municipality Mettet, flooded with water and mud flows from the fields. Passing through the commune national road No. 98 is closed in both directions.

In the heart of the Ardennes and Dinant flooded several villages and filled with local dirt roads. On national road 5 in the village of Valcourt as a result of the effect of aquaplaning died caught the rain on the road the driver of a light truck. It skidded and he hit a road sign. Rescuers arrived on the scene, it remains to verify death.

There continue to be reports about the disaster from other communes of Wallonia. On the ground, constantly on duty firemen and police. The work of the rescuers joined the army, media reported.