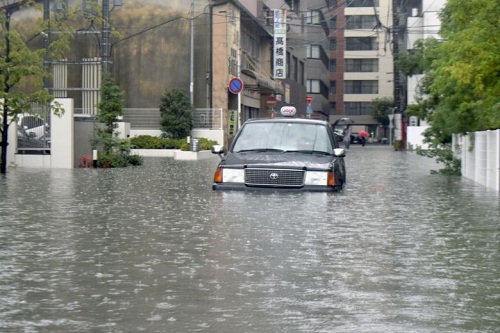 Up to 50 people are considered dead and 11 missing, and about 270,000 people were forced to evacuate from their homes after a severe flood that hit the southern Japanese island of Kyushu on the weekend. Evacuation is recommended for 1.28 million people in four prefectures in southwestern Japan due to bad weather.

At least 10 locations in Kumamoto Prefecture recorded more than 410 mm of rain in 24 hours on Saturday, July 4, 2020 — including a record 83.5 mm of rain in one hour — while the city of Kanoi in Kagoshima Prefecture had the most the highest rainfall in history at a rate of 109.5 mm per hour on Monday, July 6.

The Japan Meteorological Agency (JMA) issued a warning on Saturday of unprecedented rainfall, urging residents of the island to observe “maximum caution.” About 270,000 people were recommended to be evacuated in four prefectures throughout the island.

In Kumamoto, Hitooshi areas were under water. Ashikita and Kuma after the Kuma River overflowed in several places, flooding houses, which prompted people to climb their rooftops to ensure safety.

Flood waters washed away roads and bridges, cutting off many settlements.