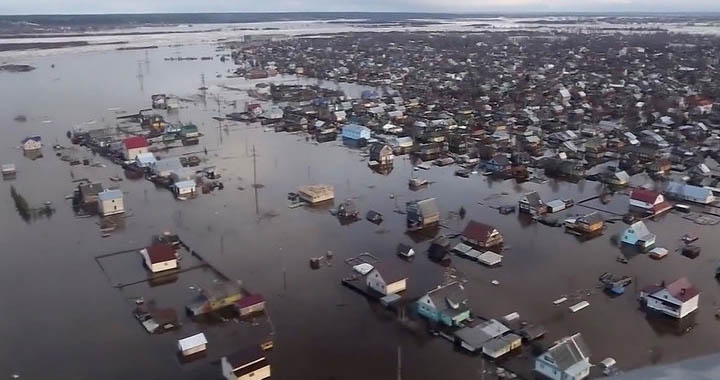 In the Omsk region liquidate the consequences of floods. Another weekend is significantly impounded the village Bolshereche. Locals believe — this could have been avoided if the time drained a nearby swamp.

Home Svetlana Nikonova sneaks only in rubber boots. Stepping carefully under the muddy water, hidden hatches cellar, where you can easily drown. Svetlana says that to return to a flooded dwelling is not desirable, but there are still things favorite toys one year old son, who on the night of the flood had to evacuate to my grandmother. “From the underground water came, raised the lid. All went into the kitchen — there is also still pouring, water everywhere. The child was frightened, began to cry, hysteria. Immediately grandma came and got him,” the woman said.

The gardens of bolsherechensk flooded, many in this year’s crop don’t even count. Killed everything from cucumbers to potatoes. However, on landing Natalya Polyanskaya has long waved his hand. The woman is pleased and the fact that the water is gone from the house. However, cost is not without the help of utilities — from the yard pumped four tanks, and the level only fell a few inches.

Big water came to bol’sherech’ye on Saturday night. Together with a powerful cyclone storm clouds then covered the whole of the Omsk region, but most got it bolsherechensk: a night in the village dropped out three monthly norms of precipitation.

The Deputy chief of the Ob-Irtysh Department of Hydrometeorology Natalia Kryvoruchko says: “a Large amount of rain fell we in bol’sherech’ye. There for less than 12 hours dropped 116 millimeters of rain. This, of course, dangerous. We believed that if the 12 hours falls to 50 millimeters or more, this is a dangerous phenomenon.”

One of the reasons a Grand flood in Bolshereche — the swamp. Locals say that back in the spring asked the utilities to pump the water out of him, because he was afraid that the reservoir will overflow. In the end fulfilled the worst fears. There are streets where the water was literally waist-high. Got bolsherechensky zoo — some animals are temporarily moved, not touched only waterfowl that flood, even joy.

Now in the zoo, and in the village there are several sewage barrels. The water is pumped out, but she’s not leaving. Controls the situation personally by the head of Bolsherechye. Alexander Koch changed his business suit for working clothes and rubber boots, but on its own, the official said, may not cope. “Treatment all to a higher authority in the Omsk, nothing. Blame the fact that we were unprepared, that the population is not engaged in sanitation that we are his work not performed. Offering fire equipment, which has a rabid fuel consumption and fuel we have no supplies,” he laments.

Now one hope — on the drainage channel that only began to dig. Meanwhile, the water dropping anywhere, including on roads that have long become limp and became impassable. According to the most rosy predictions that the situation will normalize in two or three days, and all the water will leave the village only after two weeks.