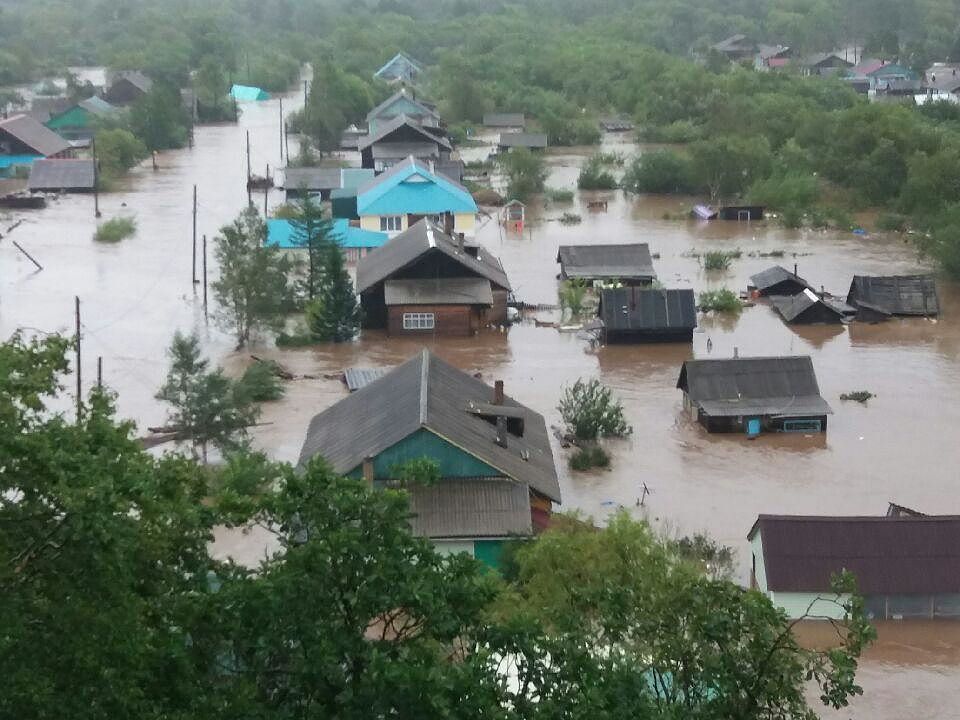 According to the information of EMERCOM of Russia for the Primorsky Krai in the morning on 1 September, the most difficult situation in connection with the passage of Typhoon “Lionrock” it in Kavalerovskiy chuhuivs’kyi and Terneisky areas.

In the result of the declining water level in rivers during the day, the water was gone from 1 residential homes and 40 local area in Kavalerovskiy district. More than 800 residents of the areas affected are evacuated to places of temporary accommodation. Evacuation of people is carried out round the clock and continuously to all the victims of the Typhoon areas.

The rise in water level continues in Krasnoarmeyskiy and Chuguevsky areas, informs the regional government.

“Currently, the rescue operations involved more than 1.2 thousand people and 187 units, 86 of which – craft.

A rescue group in the evening was reinforced with additional forces of the Ministry of emergency situations of the Russian army at the personal request of the Governor of Primorsky Krai Vladimir Miklushevsky,” – said in the Department of civil protection. On the territory of the Ussuri urban district marked decline in water 15 centimeters. In the area of flooded five houses on the street novomykil’s’ke

10 continues pumping water out of basements all over the district conducted cleaning of storm water outlets. As a result of Typhoon flooded a temporary crossing on the river Krounovka, which interrupted road connections to the villages Krounovka, Pushkino and, in part, Janovka. To the rescue operation involved more than 40 people, 10 vehicles and two boats.

In Anuchinskiy district was washed away about five kilometers of the road Anuchino-Muraviika-Yalova, which disrupted transport links with the villages of Yasnaya Polyana, Grodekovo, yelovka and Muraviika. Eliminate the consequences of 11 lifeguards and six vehicles. In Dalnerechensky district and disrupted electricity in the villages, the Roads, Ariadnoe, Paige. The emergency works involved 20 electricians and six vehicles.

Difficult situation remains in the territory of the settlements of kavalerovskiy district. River Mirror, Kavalerovo and Highland overflowed and flooded the houses and farmsteads in the villages of Ustinovka, Sinegorye, Vysokogorsk, and villages Crystal, Pornorusesti, Ore. Partly there is no communication and power supply. In addition, blurred the road Ustinovka – Mirror 19 and 29 kilometers from the damaged bridge to the village of Suvorovo.

The consequences of the disaster in the district are struggling more than 80 people and 52 units of equipment. At the moment evacuated more than 30 residents of flooded villages. The continuing rise of water in rivers Krasnoarmeisky district. At the same time, there were restored electricity supply in six villages. In Lazovsky district closed the passage to the Transfiguration. As a result of flooding from roads cut four settlements, 30 homes were without electricity. The field work 10 of rescuers and three units of equipment. The decline of water continues in the Yakovlevsky district.

Here, the vehicle runs without any restrictions. For passenger transport organized a detour through the village Dostoevo. In the cedar river in the Khasan district, the water level rose 1.5 meters, resulting in flood road in the village of Primorsky. In the village of Zarubino 30 local flooded areas, washed-away metal bridge between the towns of seaside and Transportation. Because of the overflow of the rivers is no road links with the towns of Zarubino and Tsukanovo.

The destroyed section of the road Razdolnoye – Khasan length of 10 meters. The district prepared three TACs up to 50 people each. In Germany the district came from the banks of the river Ore and Video Pad, podtopil almost 90 houses. The most affected streets of Dalnegorsk disconnected from the power supply for safety of citizens. To combat the effects of the elements connected 20 people. In Shkotovsky district of the ongoing repair work of the bridge in the village Mnogoudobnoe.

The rise of water continues in the Chuguevsky district. Currently broken road connections with the seven villages of Berezovka, Top Brewka, Arkhipovka, Clear, Medvezhiy Kut, Poplar, Izvilinka. Hardest-hit village of Antonivka and Noisy – some of the houses in these settlements are flooded on the roof. Evacuation and accommodation in TACs is carried out continuously. In the village of Novo-Mikhaylovka recorded the destruction of the dam, it was expected flooding in Koksharovka rural settlement the village of Koksharovka. To the rescue work here involved 10 soldiers and more than 100 rescuers, 10 units and 8 boats.

In the Olga district disconnected the power supply in all settlements. From roads cut 10 settlements – Milogradovo, Deciduous, Sailor, Fisherman, Margaritovo, Eyebrows, Shcherbakovka, Gornovodnoe, Mikhailovka, Furmanovo, Moldavanovka, in connection with the blurring of the road from S. Olga river Abakumovka. Continues evacuation of residents of the village of Light Terneisky district. Some people were evacuated in Khabarovsk, part – in the village of Terney, where deployed PVR 500.

In the village Particia 67 flooded homes, interrupted transport links with the village Amgu. Communication and light do not exist in the villages Plastun, Terney, Bright. The struggle with the elements involved 32 rescue 3 vehicles, helicopters Mi-26 and Mi-8. In addition, on 23 sections of roads of the Primorsky region, there are overflows of water in total over the 26.8 km.

As a result, transport information added from 17 settlements in Dalnerechensky, Anuchinsky, Kavalerovskiy, Khasan, Chuguevsky areas and Ussuri urban districts. As the Director of the Department of road economy of Primorye Alexander Swore currently completely closed to traffic on the roads Lazo – Transformation, Lazo – Sokolchi, Kavalerovo – dal’negorsk, Rudnaya Pristan – Terney, Kavalerovo – Chuguevka. Suspended the movement of passenger vehicles on 185 kilometers of the road Razdolnoye – Khasan road in the village Bear Kut, on the 9th kilometer of the road to Khorol – Rettihovka and on the road Khorol – N.Salmanovka. Travel for all modes of transport closed: on 94 km of road Kirov – Nikolo-Mikhaylovka – Yakovlevka, 2 kilometer road Lake – Beltsova eagle