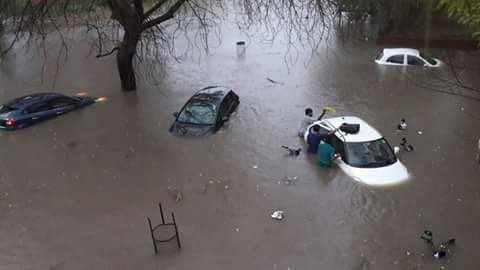 Heavy rains hit the Indian state of Rajasthan, causing serious flooding in some areas. As a result of natural disasters, from 6 to 10 August there were killed at least seven people, including six children.

Most likely from the storm affected the southern regions, where there were deaths and evacuation of people. Under the water were the district Barmer, Jhalawar, Chittorgarh, Bhilwara and Pali. The floods swept through, in particular, large cities of Jaipur and Jodhpur, violating the movement of railway transport.

In the affected areas deployed large-scale search and rescue operation, which involved teams of military, police and national forces to respond to emergencies. The impounded settlements were rescued 216 people.

In some cities fell a record rainfall. So, in Jodhpur within 24 hours on 10 August dropped 176 inches of rain, Fell — 290 mm of rain in Jalor — 230 mm of precipitation. In many rivers the water levels rapidly rose to high levels.