For the first time in 17 years, an invasion of cicadas is expected 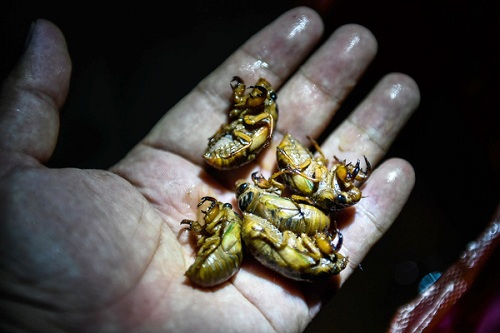 Rare cicadas have been considered a dangerous disaster for centuries. The world is waiting for their invasion for the first time in 17 years. In a matter of weeks, billions of Great Eastern Brood cicadas will surface, growing for 17 years underground.

The last time this happened was in 2004. They were once feared and considered a disaster like the biblical locust plague. Now they call it a delicacy and are advised to catch, cook and eat. “Lenta.ru” learned more about this rare phenomenon.

“We are at the epicenter of an event that has no analogues anywhere else on the planet,” says American entomologist Mike Raupp. Unlike ordinary and mountain cicadas, which are also found in Russia, the so-called periodic cicadas are found in North America. They have a unique feature: they hide underground for years, not appearing on the surface for 17, less often for 13 years.

Entomologists know 15 huge broods of periodic cicadas that inhabit the eastern United States. Traditionally, they are numbered in Roman numerals. For example, Brood I is in Virginia, Brood III is in Iowa, and Brood VII is in upstate New York. The Great Eastern Brood, which will creep out of the ground in 2021, is considered one of the largest and is denoted by the Roman numeral X (ten).

This time, the invasion of insects is expected in 18 US states. Most likely, they will be the first to be seen in Georgia, after which they will invade most of the eastern part of the United States. Scientists predict that in some places the density of cicadas will reach 370 million individuals per square kilometer.

Biologist Jean Critsky refers to periodic cicadas as history beetles. It’s enough human life to see a brood emerge only four or five times, no more. And every time the cicadas return to a completely new world.

In the past appearance of the Great Eastern Brood in 2004, there were no iPhones or YouTube, and the first social networks had just appeared. Then the cicadas intervened in a golf tournament in Ohio. During the TV broadcast, the famous golfer Tiger Woods was distracted and looked amazed at the trees, from which the deafening singing of insects could be heard.

Until 2004, the Great Eastern Brood crawled out in 1987. On that occasion, Kritsky had a chance to talk with an elderly woman who saw other appearances of these cicadas. “She told me that in 1936, when she was seven, she played with her brother,” the biologist told Radiolab. – A cicada sat on his nose, she hit her with a baseball bat and broke his brother’s nose. 17 years later, she showed her daughter periodic cicadas. And 34 years later I was going to show it to my granddaughter. ”

Adult cicadas live no more than six weeks. After mating, they lay their eggs on tree branches and die.
Soon, new larvae hatch from the eggs, which fall from the branches and are immediately buried underground. At a depth of about 60 centimeters, the larvae stick to the roots of trees and begin to wait. They will come to the surface only 17 years later.

The tree sap they feed on helps to keep track of the passage of time. Its taste changes when the next year begins and leaves appear on the trees. However, occasionally the larvae go astray and crawl out ahead of time. With cicadas of the Great Eastern Brood, this happened at least twice: in 2000 and 2017. Most of the larvae, which were almost four years ahead of their counterparts, were devoured by predators.

To the early colonists, sudden invasions of cicadas seemed like a biblical disaster. “The British have never seen or heard anything like it before or since,” wrote William Bidford, governor of the Plymouth Colony in 1633. “The Indians told them that diseases would follow the flies. It happened in June, July and August. ”

The fears were in vain. Cicadas are almost harmless: they do not bite or damage crops. Despite this, a wary attitude towards these insects persisted until the 19th century. “We have been advised that locusts are found in great abundance in some places underground,” panicked a Maryland newspaper in 1751. – It is very close to the surface and has grown to almost full size. May the Lord deliver us from inevitable trouble! ”

This month some extraordinary flies have crept out of the ground; the British call them locusts. When they first appeared, people broke and ate them, as they say, John the Baptist ate.

In 1752 and 1749, the next appearance of the Great Eastern Brood was observed by the prominent naturalist of the time, John Bartram. After another quarter of a century, the frequency of the appearance of cicadas was calculated by one of the American founding fathers, Thomas Jefferson. “It seems that they come out of the ground every 17 years, rising from an extraordinary depth for that,” he wrote in 1775.

Entomologist Charles Lester Marlatt finally dotted the i’s. In 1898, he divided all American cicadas into 30 broods according to their habitat and year of appearance, assigning each its own Roman numerals. Only 15 of them have survived to this day. Brood XXI, reaching Florida, disappeared before Marlatt finished his classification. The Connecticut Brood XI has not been seen since 1954 and is also considered extinct. The existence of 13 more has not been confirmed.