Forest fires affect the climate of the planet 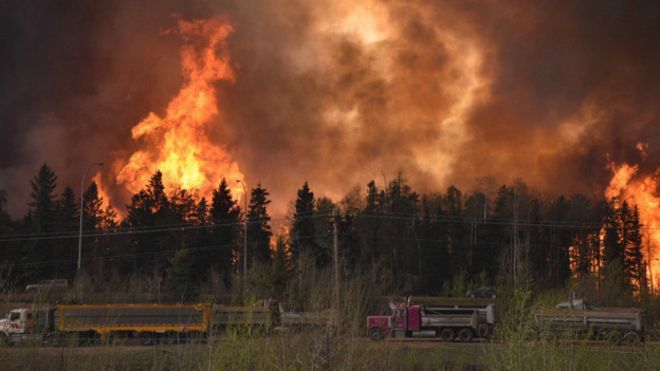 Monstrous fire, which began in early may, still burning in the huge Northern forests of Canada. It seems that a giant fire applies only 88 thousand inhabitants of the town of Fort McMurray, who had to flee from uncontrolled fire. But it’s not. Huge fires like “Monster”, affect the entire planet.

These fires are changing the face of the taiga and its role of global defender of the world from global warming. Taiga encircles the top of the globe in North America and Eurasia. Half of the taiga forest is in Siberia, another third in Canada and the rest in Alaska and Scandinavia. Taiga keeps 30 % of carbon on the planet — more than any other terrestrial ecosystem. The forest provides shelter for animals and birds, which move from the territories to the South when it gets too hot.

Climate change in the taiga is twice as fast. Permafrost is melting (a process that has no reverse), the vegetation is changing as climate zones shifted to the South faster than trees can adapt. Significant changes are clearly visible from space. Green tundra and taiga turns brown.

Some scientists predict that the taiga can reach catastrophic and irreversible points from “warehouse” of carbon become a huge source of greenhouse gas emissions. Other researchers believe that this point has been reached.

For the boreal region, observes NASA. Under the “magnifying glass” space Agency 6.4 million sq km of forests. The project consists of 24 separate studies, in which study and the change of migration routes of caribou and birds, and the role of fire in climate change.

With each degree of warming of the planet, the forest needs a 15% increase in precipitation to compensate for the dryness. Instead, forests receive less rain. Researchers found that for every degree of warming accounts for 12% increase in the activity of lightning. Lightning in the woods means more forest fires.
Fires in Canada are often burning for months and only fade with the first autumn snow. Last summer, a fire in the Northwest territories burned 1,375 million hectares of forest.

A fire in Fort McMurray has destroyed more than 589,600 hectares and is considered to be localized since ceased to increase in size. Fire, however, is still uncontrollably on fire. If the weather will once again be hot and windy, “Monster” may once again begin to grow.