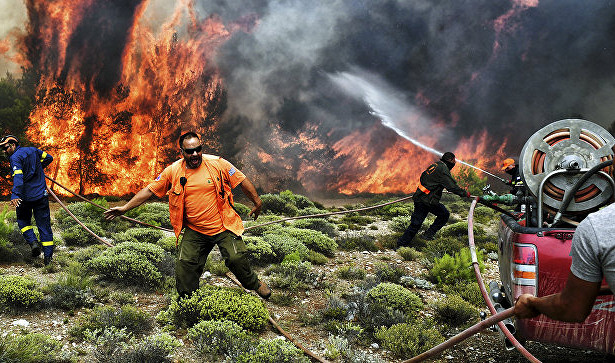 More than 400 people and dozens of vehicles all night struggled with a violent fire on the Greek island of Euboea, the situation has not yet been controlled, more than 500 residents have been evacuated, the Greek Fire Service reported.

The fire began about three o’clock in the afternoon on Sunday. In the morning, six aircraft units were sent to extinguish a violent fire, blazing for more than 16 hours – two aircraft and four helicopters.

The governor of the region of Central Greece Costas Bakoyannis on Sunday declared a state of emergency in the municipality of Dirfion-Messapion. More than 500 villagers and a children’s camp have been evacuated.
Constant information about the situation is received by the Prime Minister of Greece Alexis Tsipras, his press service reported.

Given the seriousness and danger of the situation, the Council for Combating Crisis Situations was convened to take immediate decisions.
The fire began in the daytime in the forest zone in the area between the villages of Stavros and Kontodespoti, north of the city of Chalkida, in the central part of Euboea. The rapid spread of fire contributed to a very strong wind and dry hot weather.

In East Attica in Greece on July 23, a fire occurred, 94 people were killed, almost 190 were injured.