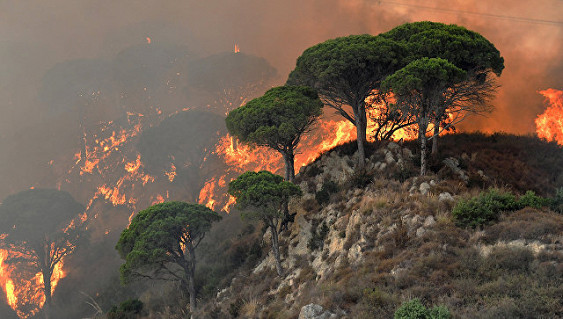 Three people died as a result of severe forest fires that rage in central and southern Italy, representatives of the national fire service reported.

Two women died in a major fire, which swept a considerable area near the city of Tivoli in the Roman province. Their bodies were taken from an almost completely burnt house. The man who was near the fireman was saved, he was found in a state of severe shock. Another victim on Monday was an 84-year-old pensioner who died in a hospital from burns received during a fire near the city of Acherra in the region of Campania in southern Italy. This is not the first victims of forest fires in the Apennines, in July, reported at least two dead men.

Forest fires have raged in Italy since early July, when the African anti-cyclone “Charon” brought to the Apennines masses of hot air from the Sahara desert. Now in the central and southern regions of the country, the fiery breath of the Lucifer anticyclone is felt, which caused abnormally high temperatures, exceeding the historical maximums in a number of regions. Climatologists note that this summer has become the hottest in the almost two hundred years of history of regular meteorological observations in Italy.

At present, particularly powerful fires are recorded in the metropolitan area of ​​Lazio, including in the suburbs of Rome, in Campania, where the fire again captured the National Park of Vesuvius, as well as on the island of Sicily, where only on Monday were recorded 39 hot spots of ignition. In the opinion of Italian law enforcement officials, the cause of very many fires is deliberate arson, and cases of arson by the firemen themselves are revealed to receive overtime.

According to the data of the European Commission’s Emergency Response Coordination Center, this summer, Italy ranked first among the EU countries in the number of forest fires (371) and second after Portugal in the area covered by fire (more than 72,000 hectares). According to local authorities, Italian firefighters have already extinguished almost 1.1 thousand hot spots of fire.