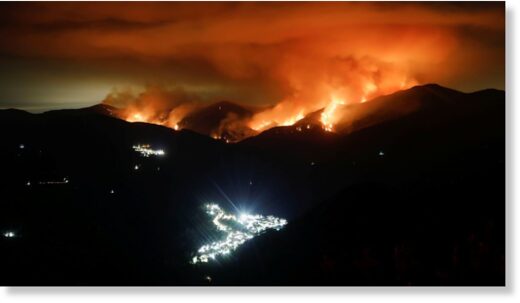 Two more towns have been evacuated and soldiers are being deployed as a wildfire continues on Spain’s Costa del Sol.

Officials said the fight is complicated by the “difficult terrain and aggressive behavior of the fire.”

One rescue worker has died since the fire broke out Wednesday in the mountainous terrain above the resort of Estepona, a popular tourist destination.

The fire, fanned by strong winds and high temperatures in late summer, appears to have been started deliberately, according to Carmen Crespo, regional environmental protection chief.

“We will work in coordination and without rest in the fight against the fire that is ravaging the province of Malaga,” he wrote on Twitter.

Andalucía’s regional forest fire agency said 365 firefighters, supported by 41 planes and 25 vehicles, were trying to bring the fire under control.

“Ground firefighters are working intensively in difficult conditions, trying to stop the advancing flames,” it added.

“The evacuation is being carried out with maximum safety measures and in front of a possible unfavorable development of the fire in the area,” the Andalusian government said.