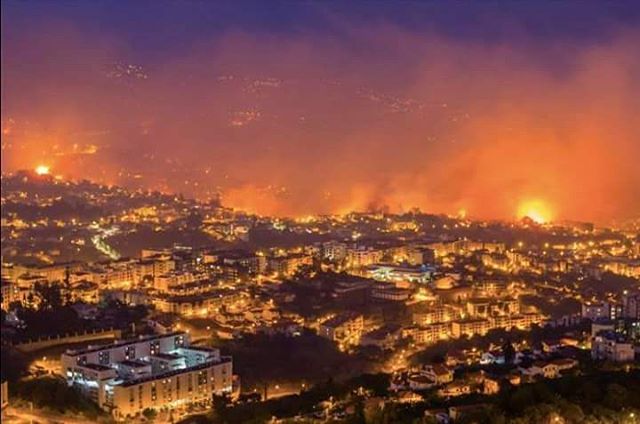 Critical situation on the Portuguese island of Madeira: the largest forest fires destroy everything in his path and has risen to the administrative center of Funchal.

Flames raging for about a week, destroyed about 40 homes from the danger zone evacuated hundreds of people from 2 urban hospitals evacuated all patients and medical staff. The fire comes quickly, and people have, leaving everything behind, to flee. Some have failed to take even the most necessary: “it’s very bad. All of a sudden started to run.

Around blazing flame. We also ran away, but then came back, took our cars and went away. And then we started to help others. Now all here help each other. Due to the complex topography of the island fire fighting equipment is difficult to reach all fires, and local residents often resist the flames themselves.

The victim of fires has become one man, about 60 gospitalizirovany with respiratornye problems and burns. Hot Sunny weather and strong winds contribute to the rapid spread of fire. It is the largest fire in the history of the Madeira Islands, which the Portuguese call Paradise island. Flames destroy a unique ecological Park in the suburbs of Funchal.

Throughout Portugal recorded 10 major fires and 350 fires. The worst situation in the Central and Northern regions . With the fire element are struggling more than 4,500 people. As the causes of most fires do not rule out careless handling of fire, and arson. In connection with the current situation, the Prime Minister of Portugal, antónio Costa, interrupted his vacation and returned to Lisbon.