Four volcanoes that could explode in the near future 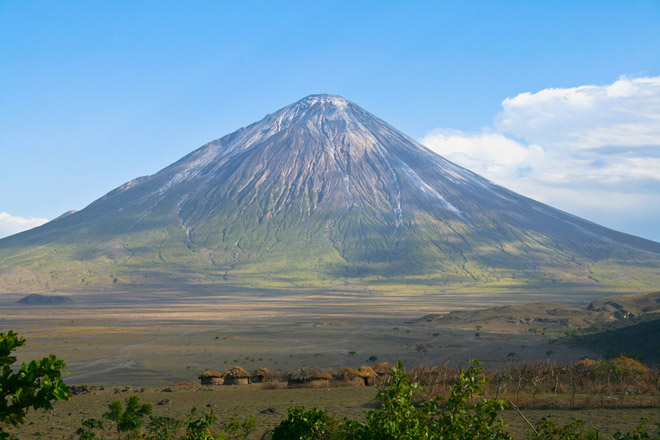 It is difficult to say how many volcanoes on Earth, but it is known that at least 1500 volcanoes erupted in the last 10 thousand years. On the average, there are 50-70 eruptions per year on the planet. Find out when a volcano will explode is impossible, but there are signs, such as elevated levels of sulfur oxide and seismic activity, which indicate that the eruption is likely in the near future. So, these volcanoes, most likely, will explode next.

The volcano, known as the mountain god, shows signs of an imminent eruption. In June 2016, scientists placed 5 sensors around the summit at a height of 2330 meters. After 8 months, one of the instruments showed a shiver on the slopes and around the volcano. Most likely, the volcano is not just trembling, and parts of it are rising upwards, which means that the eruption is likely in the near future. This will not just be a disaster for local villages. The eruption of Ol-Doinho-Lengai can erase from the face of the Earth a historical place 14 km from the volcano, which is called the “dance floor” – it has 400 human tracks 19 thousand years old.

Iceland suffers from large eruptions every 3-7 years. In 2010, due to a huge cloud of volcanic ash, ejected from the crater of the volcano Eyyafyadlyoyukyudl, air traffic over Europe was disrupted. It cost the European economy 4 billion pounds. The next time can be even worse, since the volcano Hekla, known as the “Gateway to Hell”, is preparing for the eruption. The volcano erupted about every 10 years since 1970 – but is currently in hibernation since February 2000. This long period of inactivity is especially alarming given that now the pressure inside the volcano is higher than during the last two eruptions, and magma is actively accumulating in it.

To the north of Hecla, scientists observe her older sister Katla. The last eruption of Kutla occurred 99 years ago in 1918. This period of sleep is the longest since the 1100’s. Of the 10 eruptions of Cutles, eight occurred between September and November; The melting of glaciers creates the necessary conditions for magma to break through. It is ice glacier – the thickness of which is several hundred meters – that bothers the local residents the most. If such an eruption occurs, the ice covering the volcano will melt, and the flood in the vicinity will be so strong that the authorities plan to evacuate the entire southern coast of Iceland.

The largest active volcano in the world Mauna Loa has become a cause of concern for geologists in the past few years. Mauna Loa usually erupts regularly. In the XX century, there were 10 of its eruptions. But the last eruption was in 1984, and the subsequent 33-year period of inactivity is the longest in 150 years. From 2013, Mauna Loa began to slowly awaken to life. Instruments show more frequent small earthquakes at its slopes. The increased seismic movement gave rise to fears, and in September 2015 the level of readiness for the volcanic eruption increased. The strongest volcanic eruption in the last century occurred in 1950 and lasted 23 days. Although no one died, 376 million cubic meters of lava descended from the slopes of the volcano, reaching the sea in 4 hours and destroying the village.