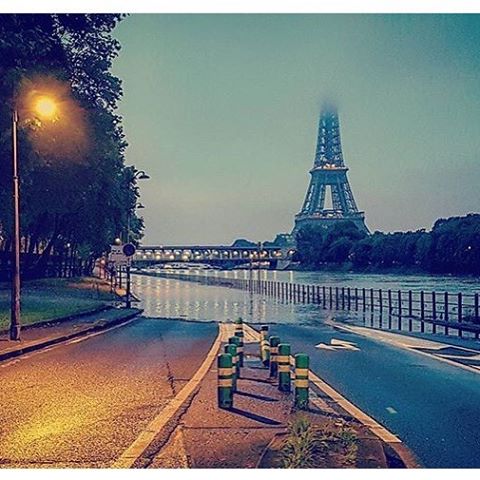 The water level in the hay because of the rains has risen more than 4 meters. It is expected that by Wednesday evening the water in the hay will reach the mark of 5 meters.

Heavy rains in recent days have led to the increase in water level in the Seine within the boundaries of Paris at 4.15 m above the zero level. This was reported by the meteorological service of the city. It is expected that in the coming hours will be stopped the movement of barges and pleasure boats on the Paris part of the river. This should be done when the water will come to around 4.3 meters.

At present Parisians can see that the water has filled the boots of suave is the sculpture of the soldier of the colonial forces mounted one of the pillars of the Alma bridge and traditionally serves as an indicator of the dangerous rise of water in the river. Already flooded on the right Bank quay of Paris plays an important role in automobile traffic in the city. And flooded the lower part of the quay d’orsay, located between the Ministry of foreign Affairs and the Eiffel tower.

It is expected that by Wednesday evening the water in the hay will reach the mark of 5 metres, and the night will exceed it. Record for Paris is the level of the flood of 1910, when the water rose to 8.5 meters, inundating a quarter of the territory of the capital. Then the flood lasted over a month.

At the moment the rain in Paris and its surrounding areas has ceased, but it had little impact on the situation. As reported by the Prefecture of the Department of Seine and Marne, they had some water in all the tributaries of the Seine continues to arrive. A stable level was observed only in the Loire Department (South-West of Paris), where on Tuesday flooded the streets of several cities and more than 100 km of motorway A-10.

It is still under flooded hundreds of cars – in some areas it rises to the roof of cars. Many passengers had to be evacuated by army trucks and amphibians. According to experts, a large part of this motorway is now closed for at least five or six days.

It is expected that the rains in the North and Central part of France will resume on Thursday. The improvement in the weather is possible on Saturday.