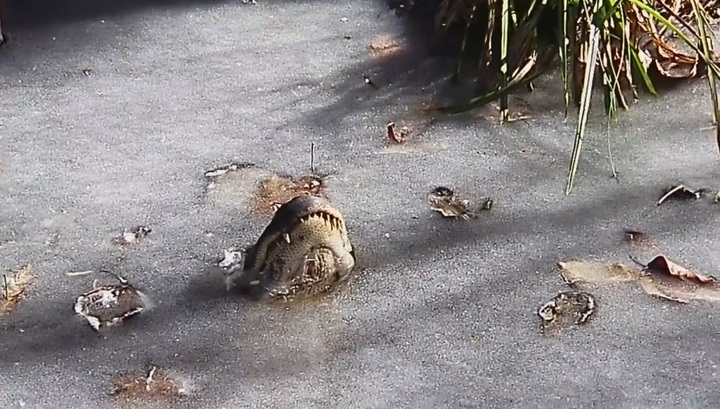 Inhabitants of the North Carolina National Park alligators froze together with water in local reservoirs – only their mouths were visible on the surface. The ranger Shallotte River Swamp Park filmed the video of immobilized reptiles.

At the beginning of the year, half of the US states were in emergency mode because of the frosts and snowfall that hit the country. In some places, the temperature dropped to minus 30 degrees Celsius, the victims of the weather became, according to the latest data, 26 people.

Nesladko had and animals, in particular alligators from North Carolina. The animals literally froze into the ice, which bound the rivers and lakes. At the same time, reptiles do not perish, but they skillfully lower their body temperature and fall into the state of a peculiar sleep mode, which experts call brumation – “hibernation.” It is necessary to rise the columns of the thermometer, and alligators will also thaw out, while visitors have the opportunity to touch these predators with impunity.