From the volcano Shiveluch in Kamchatka the pyroclastic flow 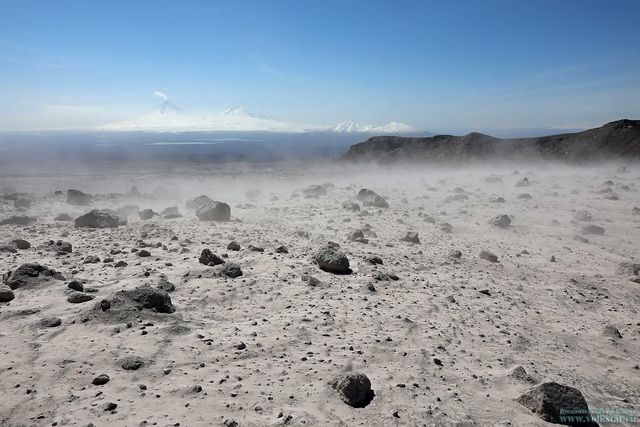 Powerful ash release on Shiveluch volcano. The low cloudiness did not allow the staff of the volcano station to make a visual assessment of it. According to the satellite data of the Kamchatka Response Team for volcanic eruptions (KVERT), its altitude reached 9-10 kilometers above sea level.

On the morning of April 13, the foot of the volcano opened, and one could see the “trail” of a powerful pyroclastic flow. The next day the Kamchatka volcanic station’s field squad traveled to select his samples.

“We could only get to 450 meters above sea level. The soil was saturated with moisture, and the car was elm. By snowfields we reached volcanic dikes at an altitude of about 1000 meters. There was one small mustache from the main stream, “Yuri Demyanchuk said.

According to him, the selection was made in three different places. Did not take the hottest material, tk. Plastic bags spilled from the temperature. “The consistency of the material was very different from previous flows. It is more delicate, like cement, “Yury Demyanchuk added.

Reference: Pyroclastic flow – a mixture of high-temperature volcanic gases, ash and stones, formed during the eruption of the volcano. The flow rate reaches sometimes 700 km / h, and the gas temperature is 100-800 ° C.