From what do most people die during the eruption of the volcano? 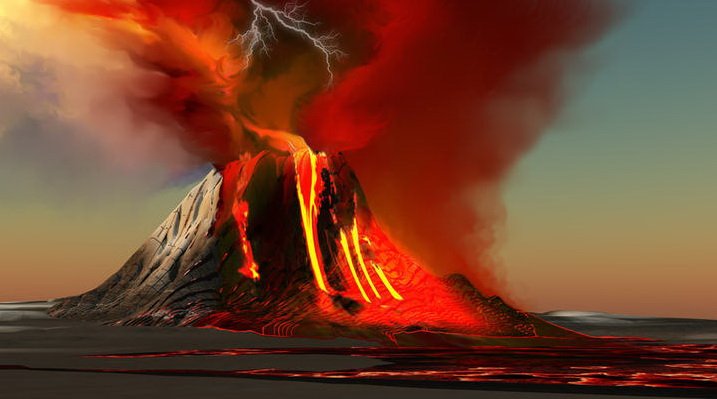 In the blockbuster “The World of the Jurassic Period-2” spectators are horrified not only by dinosaurs, spreading chaos. People are sent to save some prehistoric creatures on the fictional volcanic island of Nublar, and soon real horror begins. There is an eruption of the volcano and everyone escapes when a cloud approaches them, called a pyroclastic stream. At some point, the protagonist disappears in this cloud. Fortunately, some dinosaurs and people in a strange glass bowl fall from the cliff into the sea, and the main character soon rushes after them.

However, could anyone actually survive in this situation? What is it like to live and die in the shadow of a volcanic eruption? Illustrations depicting a jelly-like lava, slowly sliding down the mountainside, do not tell the whole truth. Even the beautiful pictures of the eruptions in Hawaii circling the world in June 2018 with the fountains of the rainbow yellow-orange mass give a romantic, idealized view.

Some volcanoes erupt relatively calmly. Known as “thyroid volcanoes,” they form when a huge bubble of molten rock (magma) rises from the depths of the planet, and then pours out like blood from a wound. This lava river (the magma that reached the surface) can be devastating, as it easily erases the house from the face of the earth, but at least you can overtake it.

However, the history of the destruction and death of the Roman city of Pompeii in 79 AD gives an idea of ​​the much more lethal form of the volcano. The eruption of Vesuvius produced a “black and terrible cloud pierced by rapid zigzag flares”, which opened after him a mass of a fanciful flame. They looked like solid flashes of lightning, only much more, “wrote Pliny the younger many years later in a letter to his friend Tacitus. It was this strangling cloud, and not the flow of lava, that killed most of the inhabitants of Pompeii.

Vesuvius belongs to the so-called complex volcanoes. In them, magma consists of many different rocks, liquids and gases, compressed deep underground tectonic plates. Under pressure and due to heat, this volatile mixture melts, and then rises to re-escape into a large magmatic basin below the surface of the earth. Unlike the slit volcanoes, these pools contain many gases that can not escape from the hard roof of the volcano. As more magma and gas bubbles rise from below, the pressure builds up and builds up, like in a bottle that is shaken. Finally, the stream escapes, releasing a thick cloud of steam, ash and debris of stones that hover above the volcano before crashing into the pyroclastic stream. This is what makes complex volcanoes so dangerous.

Imagine what it was like to live in Pompeii, long before volcanologists learned to catch signs of an imminent eruption, such as vibration, smoke, heat and the crust of the earth. First, a strong eruption explodes the upper part of the volcano itself, sending huge stones and boulders into the air, which land at a distance of several hundred meters. Lava runs down the slopes. Earthquakes cause the soil to shudder for five minutes, putting you on your knees. But there is still time to escape.

When the worst happens, the ashes fly into the air, turning the day into night. A thick cloud hovers above the volcano for a few minutes, sometimes a little longer. Finally, it explodes and runs down the slopes, carrying deadly boulders and steam ahead, gathering speed along the way. Cascade killer can reach speeds of 80 to 700 kilometers per hour, so it can move even uphill. You can not bypass it. Even if you are a kilometer away, the flow will reach you in just five seconds. Ashes in the air will scald your lungs and make breathing almost impossible. The temperature in the stream can reach 1000 ° C, so your flesh will begin to burn even before the cloud touches you, as it heats the air ahead of you. If the cloud envelops you, it’s the end.

These horrendous avalanches killed thousands of people in history. In addition to Pompeii, almost all of the 30,000 inhabitants of the city of Saint-Pierre in the Caribbean were killed when, in 1902, the volcano Pele erupted. Mount St. Helens in the state of Washington killed dozens of people during the eruption in 1980.

Nevertheless, in the pyroclastic flow it is possible to survive – unlikely, but in principle possible. One of the survivors during the eruption of Mount Pele hid in a prison cell without windows, protected from the outside world. Another hid in a cave on the edge of the island and was washed into the sea, and a few days later he managed to escape. Some creatures survived because they were in their holes under the ground, protected from the deadly temperatures at the top. Dave Crockett, the reporter who saw the eruption of St. Helens, described his journey as “hell on Earth”, the roads washed away by lava flows, the air filled with hot ashes, and the day turned into impenetrable darkness.

Pliny the youngest was lucky. He lived in a small town on the opposite side of Mount Vesuvius. If the pyroclastic flow swept the other side of the volcano, it is unlikely that any of his letters would reach us. We would never know how it was, as one of the great cities of antiquity swallowed up a cloud of death.

The hero of the “World of the Jurassic Period” and his dinosaurs were very fortunate. If the pyroclastic flow were real, none of them would leave the island.