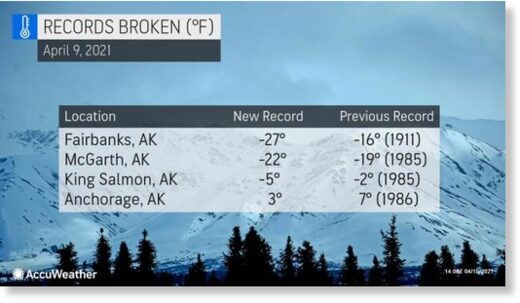 In parts of Alaska last week, record low temperatures were recorded, and an equally intense cold began to penetrate the Pacific Northwest of the United States.

A historic cold blast in Alaska at the end of the week caused temperatures to plummet below freezing and break several long-standing records.

Temperatures dropped to minus 27 degrees in Fairbanks on Friday, breaking a century-old record of 16 degrees below zero since 1911.

Cities such as McGrath and King Salmon have also set new records.

Even in cities like Anchorage, temperatures dropped, breaking the 1986 daily record.