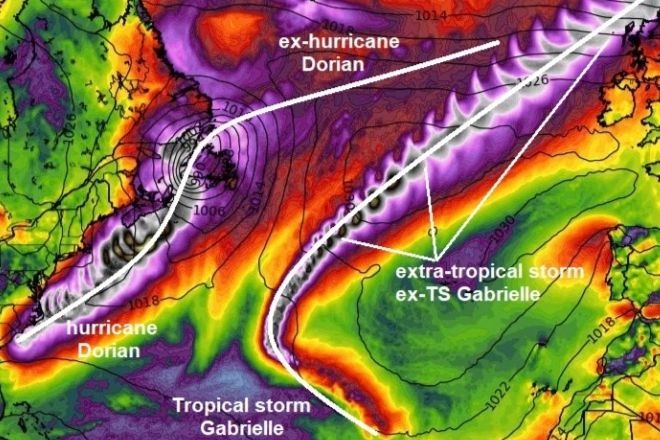 The Gabriel Storm, formed in the North Atlantic, will be driven out into Western Europe and will develop a dangerous force by the middle of next week. On Thursday, September 12, northern Britain and the Faroe Islands can be affected by a severe hurricane, according to Severe Weather.

In the autumn months, cyclone formation activity in the North Atlantic increases. Currently, there are two powerful systems in the Atlantic Ocean: Hurricane Dorian and tropical storm Gabriel. It is expected that in the coming days both of them will move to mid-latitudes.

Dorian will be active along the east coast of the United States, and can then travel across the North Atlantic as a weakening extratropical storm. At the same time, Gabriel will strengthen over time and develop a dangerous deep cyclone moving towards Europe. The potential of the cyclone will increase, it will develop a powerful storm in the northern part of Great Britain and in the Faroe Islands until the middle of next week.

Storm “Gabriel” is accompanied by steady winds. In addition, in the coming days, Gabriel will be affected by significantly higher temperatures near the surface of the ocean, which will lead to the re-development of deep convection and the intensification of the hurricane by Monday September 9th.

Hurricane Gabriel will rush to the northwest, then sharply turn to the northeast and accelerate towards Europe. According to forecasts, on Thursday, September 12, a storm will be observed in the northern part of Great Britain and the Faroe Islands. A potentially powerful storm can lead to strong winds exceeding 120-130 km / h in some areas.

Meanwhile, Hurricane Dorian continues to follow the northeast, gradually turning into an extratropical storm. When the cyclone reaches Nova Scotia on Sunday, September 8th, it will remain a fairly intense system with high central pressure.

It is assumed that Dorian will continue to move eastward south of Greenland, move across the North Atlantic and pass between Iceland and Great Britain with a gradually weakening tendency.