Geologists have found seven volcanoes dangerous to the population in California 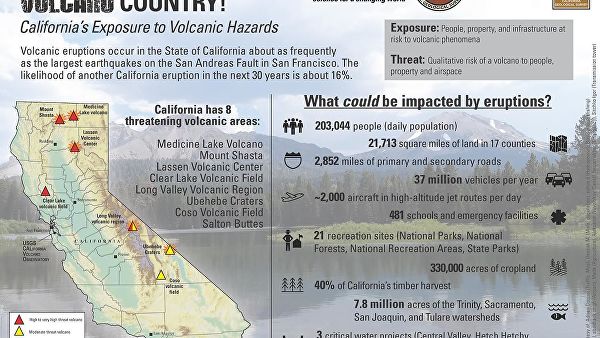 The US Geological Survey said that seven volcanoes in California are active and represent a significant threat to the territory where almost 200 thousand people live or are daily, according to the organization’s website.

“According to estimates of volcanic threats from the US Geological Survey, eight young volcanic areas in California pose a moderate, high or very high threat,” the service report says. According to experts, seven volcanoes in these areas are considered “active” and “can cause a volcanic earthquake, a gas outlet, geothermal sources” and the movement of the soil.

As noted in the study, more than 199 thousand people live, work or daily cross it in a zone of increased volcanic danger in California.

Last October, the US Geological Survey published a report containing an assessment of the threat of volcanic eruptions and a list of 18 most dangerous volcanoes, the eruption of which could lead to catastrophic consequences. According to the researchers, the most “powder kegs” are located in Alaska (5), followed by Washington (4), Oregon (4) and California (3). The remaining two volcanoes are located in the state of Hawaii. In total, there are 161 volcanoes in the list, in addition to especially dangerous there are high-threat groups – 39 volcanoes, moderate – 49, and low – 34 volcanoes and very low danger – 21.