Germany’s flood catastrophe was made possible by “inconceivable ignorance” 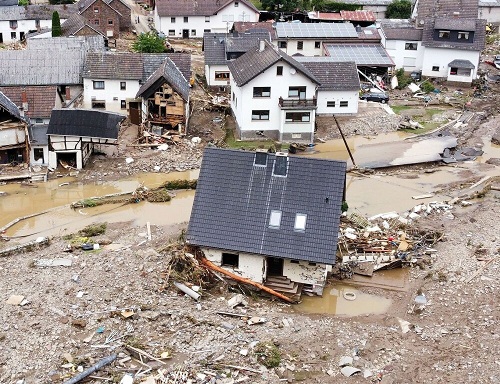 The German media seems to be slowly waking up from the hypnosis of “fighting global warming” and no longer believing German leaders’ claims that the devastating floods were caused by climate change. It is becoming increasingly clear that this catastrophe was the result of unimaginable government incompetence.

A catastrophe made possible by “unthinking ignorance”

Today we are witnessing unusually harsh criticism from a number of media outlets aimed at the mediocrity of the German government. For example, the science editor of Welt, Axel Bojanowski, wrote a commentary that the flood disaster was made possible by “inconceivable ignorance:

Politicians, authorities and the media point to climate change as the cause of the flood disaster. However, warnings about adverse weather conditions have not been taken seriously. And our country’s defense against natural disasters is at the level of a developing country.

The risk was known: Rains like the one this week have occurred many times in Germany, historical chronicles describe them and they were no less severe than the current flood, and weather forecasters warned of the likelihood of flooding several days in advance. Nevertheless, politicians, authorities and the media point to climate change as the cause – while Germany’s defense against natural disasters is at the level of a developing country. Incredible scandal.

At least 156 people died because of heavy rains in Germany. The rain fell in amounts that have always been expected in Germany and have been an accidental occurrence since time immemorial. The same places that were devastated by this week’s torrential rains have suffered similarly in the past, chronicles show.

The 660-year record of flooding indicates that similar floods have been in the past and will be in our time and in the future.

Those who claim that the weather cataclysm occurred unexpectedly and could not be prepared for it are no longer taken seriously and only confirm their historical ignorance.

Dr. Carl August Seele gives an exhaustive history of the floods on the Ahr River, beginning in 1348.

The Ahr River, which became the center of last week’s flood, is the northernmost tributary of the Rhine, 90 kilometers long and with a catchment area of 900 square kilometers.

As the chronicles show, the floods have occurred dozens of times, and the authorities have clearly been comatose and have not even made sure to release water from the reservoirs overflowing from previous rains.

For too many years, the old, crusty bureaucracy concentrated on protecting the climate, ignoring protection from the vagaries of the weather. Their strategy, as incredible as it sounds, has been to try to create good weather by reducing CO2 emissions. This is so silly.

The people who want us to think they can save the world’s climate couldn’t even manage a flood.