Geysers have formed in London after the rains, gushing out of the sewers to a height of up to 30 meters 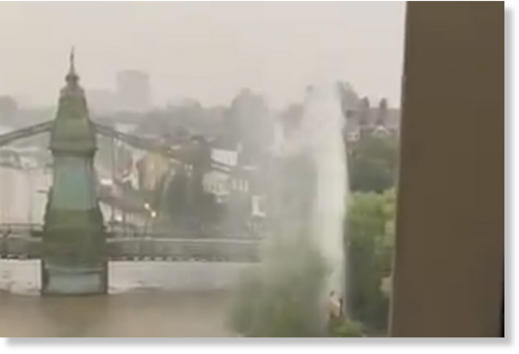 A Hammersmith resident was stunned when a geyser containing sewage after a heavy downpour burst 30 meters into the air near his home for the second time in 13 days.

Heavy rains hit the capital yesterday afternoon, causing a storm drain to burst, spewing water into the air 30 meters above the Hammersmith Bridge.

The Queens Wharf resident now fears children may play in the foul water if nothing is done to fix the problem.

Mr. Brill said: “There was a rumbling sound before the explosion. Then it kept exploding. It was like a geyser in Yellowstone National Park. It was very surprising. I was told that 90 percent of it was clean water and 10 percent was sewage.”

A social media user named Thury Bjork, who filmed the incident from a nearby building, drew a comparison to an Icelandic geyser.

He said: “This is crazy! Hammersmith Bridge right now. Reminds me of a geyser in Iceland.”

Earlier, the Thames Trail was covered in a mysterious gray mud. Peter suspects it’s an accumulation of tissues and toilet paper from the sewer pipes.

He added: “The whole area was covered in this gray, sticky material. Children used to play here.”

The area is now cordoned off so that no one walks on the debris left by the storm.

Thames Water said it was working to address the flooding that forced the closure of nine London Underground stations, including Covent Garden, North Greenwich, Pudding Mill Lane and Stepney Green.

Large areas of East London were also completely flooded after the storm, and a major incident was declared as the A&E department of Whipps Cross Hospital in East London was flooded due to heavy rain.

In a brief statement on social media, Thames Water explained that they had been working all night to try to prevent further damage.

They stated, “Our teams worked all night to support London Borough emergency planners and local authorities, and continue to work this morning, doing what they can to help.”

Absolutely disgusting.
This is the consequence of privatisation in combination with an anti-state, anti-tax ideology that refuses to fund the systems needed to maintain a properly functioning system.