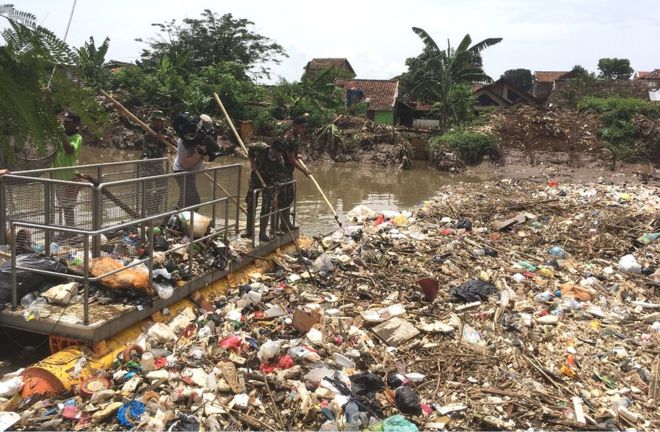 The crisis of plastic debris in Indonesia has become so acute that the military was called to the rescue. The rivers and canals are packed with dense mass from bottles, packages and other plastic packaging. The authorities say they are participating in a “battle” against garbage, which accumulates immediately after it is cleared.

Like many rapidly developing countries, Indonesia has become notorious for fighting the mountains of garbage. The population growth coincided with the spread of plastic containers, which replaced the natural biodegradable packaging, for example, banana leaves.

Local authorities are trying to ensure the collection of garbage, but do not keep up with the significant increase in waste produced. And the long-term habit of throwing trash into ditches and streams means that any attempt to purify the environment requires a huge change in public opinion.

In Bandung, the third largest city in Indonesia, the concentration of plastic debris is so dense that the resulting garbage iceberg blocked a large influx. The soldiers who were sent on the barge use nets trying to remove packages, food packages and bottles, which, it seems, is a useless job, as the plastic is constantly arriving.

To convince people that plastic is a resource, a key step to solving the crisis. To stimulate the processing of plastic, authorities in the Bandung area support the initiative of eco-villages, where people can bring old items from plastic and earn a small amount of money. Plastic then divided by types. The authorities hope that the news that plastic has value will spread and raise awareness about the problem of plastic debris. But they also recognize that many residents are not interested or can not understand the meaning of the initiative.

Meanwhile, at the only Bandung dump – which receives only a small fraction of the garbage that the city produces – an informal form of processing is developing. About 500 so-called vultures are prying every heap of rubbish for the presence of plastic products. Some families live solely on landfill, and it also shows that there is a market for recycled plastic.

Apart from Bandung, the problem of plastic debris exists in the capital of Indonesia, Jakarta. In its suburbs the whole channel is completely blocked by plastic. The most apocalyptic scene was in a fishing village on the coast. The beach was completely hidden under a thick layer of plastic debris, the strip of which stretched for hundreds of meters.