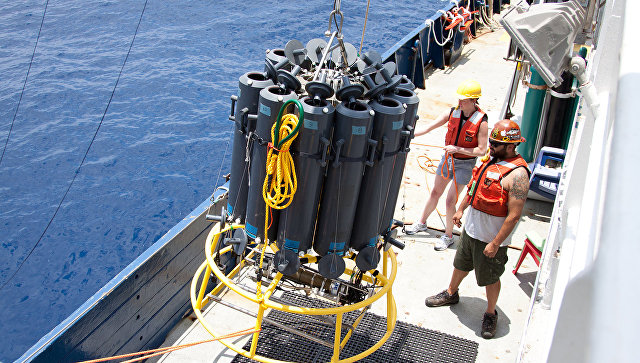 The thickness and extent of the so-called zone of death in the depths of the oceans – areas of the sea where there is no oxygen and where there is no life, has significantly increased in recent years because of climate change and unusual bacteria-killers.

Areas of the oceans with low oxygen content, the so-called death zone, formed as a result of water pollution by fertilizers and industrial waste. The ingress of nitrates and other compounds in rivers and then in the coastal areas leads to rapid multiplication of unicellular algae in the ocean, the death and decomposition of which in the water column absorbs most of the oxygen. Most of the animals in such conditions does not survive.

As told by Frank Stewart (Frank Stewart) from Georgia Institute of technology in Atlanta (USA), recently scientists have found that growth zone of death in the ocean contributes to climate change and rising global temperatures on the Earth through which the waters of the seas worse hold the oxygen, and algae will multiply more actively with the appearance of nutrients in the water.

Studying this phenomenon in the ocean, Stewart and his colleagues found an unexpected accomplice to global warming – a special bacteria-killer from the family SAR11, which exacerbates this effect and causes the death zone to grow even faster.

These microbes, so-called gamma type SAR11, a little different from their normal relatives, and we would not have noticed if not carried out a full genomic analysis. We believed that these microbes can live without oxygen, in principle, and did not see them as a threat to life in the ocean layers, where its concentration is small, ” said Stewart.

After analyzing the DNA of bacteria extracted out of the kill zone off the West coast of Mexico in the Pacific ocean, scientists have discovered that SAR11 genome contains genes that allow these microbes to breathe not only oxygen, but also nitrogen compounds, by absorbing nitrate (NO3) and releasing nitrogen and nitrite (NO2).

As a result, these bacteria-killers deprive the inhabitants of these layers of the seas is not only oxygen, but also potential sources of food themselves compounds of nitrogen and algae, which use them for their growth. This, according to the researchers, significantly accelerated the growth zone of death in recent years, which is now over 8% of the area of the world ocean.

Moreover, the allocation of nitrogen dioxide, a strong greenhouse gas, and slowing down the growth of algae, absorbing carbon dioxide and holding it deep in the sea and on the ocean floor, increases global warming. Given that microbes from the family SAR11 are virtually the only inhabitants of the zone of death, this suggests that they are one of the leading factors in climate change, the scientists conclude.