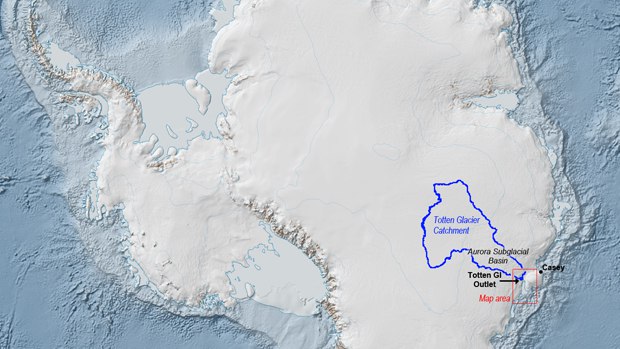 The current pace of climate change may cause instability of the Antarctic ice core, which will lead to a rise in sea level by more than two meters, the scientists believe. The findings of a new study relating to the future Totten Glacier, which occupies a large part of the East Antarctic Ice Sheet (EAIS) and affect this one of the world’s largest glacier areas.

Studying the history of advances and retreats of the glacier Totten, the researchers found that if climate change continues, the glacier can cross the critical threshold for the next century, having entered into an irreversible period of very rapid retreat. This will be the reason for his removal into the mainland at least 300 km in the next century, and will release huge amounts of water.

East Antarctic shield is now considered relatively stable in terms of global warming, compared with a much smaller ice sheet in West Antarctica, but Tottenham different trend observed significant loss of ice. The new work shows that the glacier may be even more vulnerable than previously believed.

A study conducted by researchers from Imperial College London and institutions in Australia, USA and New Zealand has been published in the journal Nature on May 18. Last year, the team discovered that currently circulates warm water under the floating part of the glacier and it is stronger melting than you would expect. Their new study aimed at studying the geology of the glacier has shown that if he retreated to 100-150 km, its front will be on an unstable and it could trigger a period of even more rapid retreat of a glacier. As a result, it will move inland about 300 km from the current position.

According to co-author Professor Martin Siegert, his retreat to the full 300 km inland can take several hundred years. However, once the glacier crosses a threshold in an unstable region, the melting will be impossible to stop – at least, up to the point where the base will again be more stable.

“In the course of data collection, a picture emerges much stronger vulnerability of East Antarctica warming than we expected. Ice loss in Tottenham in warm ocean glacier may push back in geologically unstable place, “- said the scientist.

“Only Totten Glacier regulates the stability of the ice sheet in East Antarctica. This shield is by far the largest mass of ice on Earth, so that any, even small changes have a major impact on the global level. ”

To understand the history of the movement of the glacier, the team studied sediments beneath it using airborne geophysical research. Geological data that have become available for study at the expense of the destruction of the ice, the scientists uncovered the story of the glacier, there are millions of years old. It turned out that the last glacier retreated more quickly over some unstable areas. Based on these data, scientists have concluded that when the glacier again fall into these areas, we will see the same picture of rapid retreat.