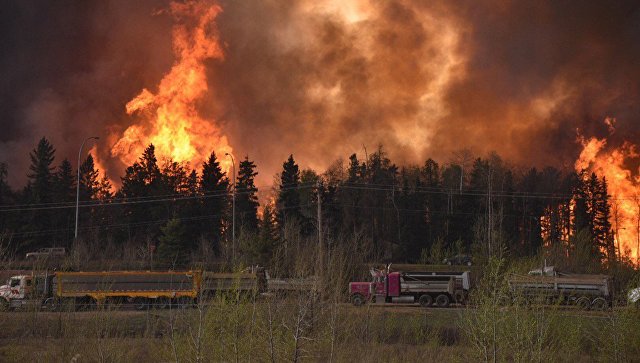 The increase of average temperatures on Earth caused by greenhouse gas emissions have actually doubled the frequency and extent of fires in the Western regions of the United States, say climatologists.

We do not expect the impact to be a global warming – they’re already here in the form of increased frequency of forest fires in the Western United States. In recent years, the fire seasons grew longer, the fires were becoming large scale, larger tracts of forests were burned, and it made us ask ourselves the question – why is this happening?, said John Abatzoglou (John Abatzoglou) from the University of Idaho, Moscow (USA).

Abatzoglou and his colleague, the Williams Park (Williams Park) from Columbia University in new York came to this conclusion by analyzing changes in frequency of fires in the United States, and how changing one of the most important parameters of forests and their dryness – in the last three decades.

As explained by climatologists, dry forests are extremely significant effect on their fire resistance – the drier litter and less water contained in the trees, the higher the probability that the accidental fire caused by lightning strikes or human activities, will cause large-scale fires covering large areas.

For calculations of this parameter Williams and Abazoglu have used data that was collected by the spectrometer MODIS on Board the Terra satellite climate last year, and measurement of forestry from 1984 to 2014. Changes in the level of dryness of the forests the scientists compared the seasonal climate fluctuations in order to separate the normal natural variation of climate from the effect of global warming.

As shown by their calculations, the warming of the Earth by 1.5 degrees Celsius over the past 75 years has led to a substantial draining of forests in the Western regions of the United States in approximately 55% of cases. This drainage, in turn, almost doubled the frequency of forest fires in America in recent years, increasing the area of fires by 75% just since the beginning of 2000.

Further, the frequency of fires, according to Abatzoglou and Williams will only grow due to the fact that global warming has already extended the fire season — the time when the probability of ignition of a maximum of nine days.

Whether this situation is the new norm? In my opinion, this is not so, but we are moving rapidly in this direction. We expect that the strength of the action of anthropogenic and climatic factors will increase in the coming decades. While in the forests to grow trees, climate change will play a crucial role in the spread of the epidemic of fires — concludes Abazoglu.