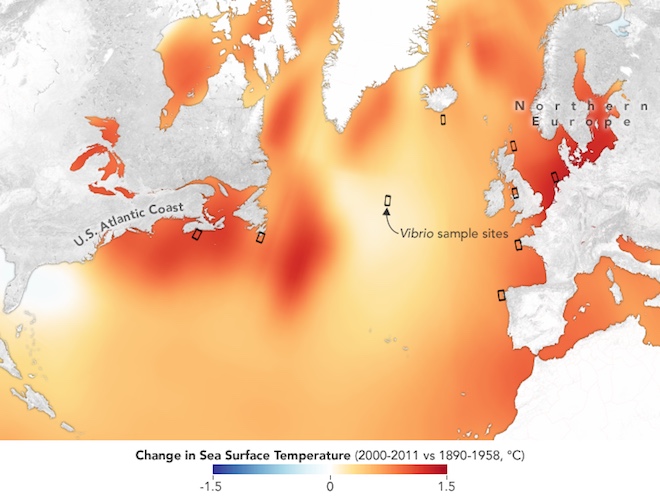 The rise in water temperature in the world’s oceans can trigger a sharp rise in marine bacteria called Vibrio, potentially deadly to humans. This is evidenced by the results of a study of a team of scientists led by Luigi Vecully from the University of Genoa in Italy. The aim of the researchers was to establish how the warming of the world’s oceans affects other ecosystems of the planet, including the marine fauna.

Bacteria of the species Vibrio live everywhere in the world ocean – from surface waters to the seabed, from the coast to the open ocean. To humans, infection with these bacteria threatens the development of vibriosis, the symptoms of which can range from seizures and nausea to meningitis or encephalitis, which can potentially lead to the patient’s death.

According to the American Centers for Disease Control and Prevention, 80,000 Americans register vibriosis annually, with most of the cases the source of the disease is contaminated with seafood, in particular raw oysters. Nevertheless, it is possible to become infected as a result of the direct impact of contaminated sea water on an open wound on the human body, experts say.

The scientists found that, despite the wide spread of Vibrio bacteria, which are most often found in marine plankton, their concentration is usually higher in warm waters. That is why outbreaks of infections are most often recorded between May and October. However, in the longer term, according to the authors of the study, due to the gradual rise in sea surface temperature, the prevalence of these dangerous bacteria, and hence associated diseases, will increase.

So, NASA specialists give for the sake of clarity the map of the water surface temperature change in the North Atlantic from 1890 to 1958 and from 2000 to 2011, based on the data of the British Meteorological Service. Dark orange and red areas on the map indicate areas of greatest warming. In this case, according to experts, the warming of the waters of the world ocean coincides in time with an increase in the concentrations of Vibrio bacteria, climate change and an increase in reported cases of vibriosis, indicating a direct correlation of these facts.

To confirm the correlation, scientists investigated the DNA of bacteria from archival samples collected as part of a long-term monitoring program for plankton, conducted in 1958-2011. In areas of warming, data from the archives of sampling plankton (marked on the map by rectangles) indicated an increase in the number of Vibrio bacteria. Scientists have proven that this growth is associated with changes in climate models (the Northern Hemisphere temperature index and Atlantic multi-decade oscillations) and all these changes are parallel to the growth of Vibrio-related diseases registered on the Atlantic coast of the United States and in Northern Europe.