Greek island of Kos shake a series of earthquakes 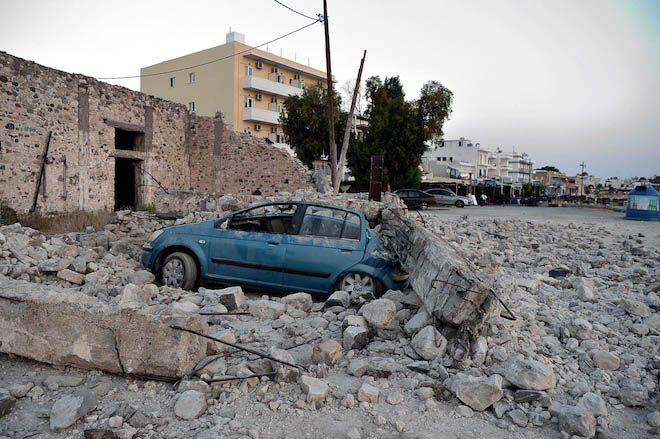 Experts began assessing damage to cultural monuments and infrastructure on the eastern Greek island of Kos on Saturday, July 22. A day earlier the island was shaken by a powerful earthquake, which caused the death of two tourists. A total of 500 people were injured on the shores of the Aegean Sea, including in Turkey.

Residents and tourists have not yet recovered from the initial panic when on the night of Saturday Kos shuddered from a series of aftershocks. The first push with a magnitude of 4.4 hit at 20:09. People ran to the main square of the city, as far as possible from the buildings. Fifteen minutes later the island was shaken by a second seismic wave of magnitude 4.5. The epicenter of the first aftershock was only 20 km to the north-east of Kos and lay at a depth of 10 km.

Hundreds of residents and tourists spent the night from Friday to Saturday on the street, as they were too scared to return to their homes or hotels. Many broke tents in parks and olive groves, slept in cars, on beaches or in sun loungers by the pool.

The church, the old mosque, the castle of the XIV century in the port and other old buildings that suffered from the earthquake, were checked by archaeologists and experts from the Ministry of Culture of Greece.

The US Geological Survey estimated that the magnitude of the very first earthquake was 6.7. Two men, Turks and Swedes, were killed when a wall collapsed in a popular bar in Old Town on Kos. Those who received serious injuries were transported by air to the mainland and the island of Crete. The two were still in critical condition on Saturday.

About 350 people were injured in Turkey, in Bodrum and other beach resorts.

On Kos, an earthquake damaged the main port of the island, so the ferry takes the port of Kefalos on the south-west coast. Of all the mosques, the most powerful mosque was the Defterartar-Ibrahim Pasha Mosque, whose minaret, which was rebuilt several years ago, completely collapsed. Also fallen ancient columns on the southern part of the agora of the II century.

Mayor of Kos Giorgos Kiritsis said that the biggest infrastructure problem of the island is damage to the main port. He also noted that few of the tourists interrupted the rest because of the earthquake.