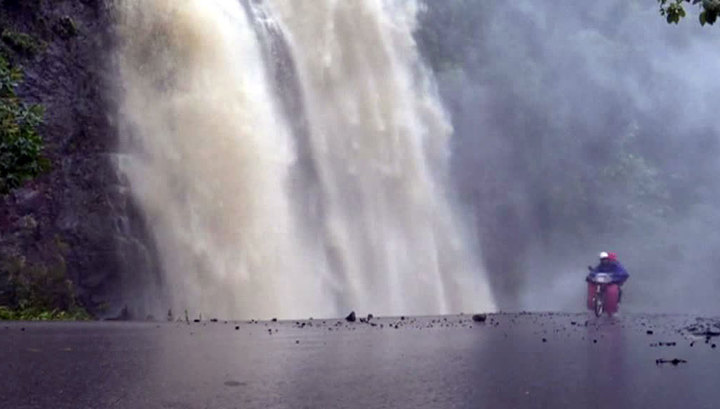 As a result of floods in the south of China, more than 80 people were killed. The rains have not stopped for two weeks. Meanwhile, the central, eastern and western provinces are languishing in the heat.

Streams of such strength that they do not need to demolish the bridge – one, then another. Water does not just grind the stone – it scoured the base of the mountains. And now the block is already flying down.

Whether it’s adrenaline, or shock, but people seem to lose their fear. Here in one county in the province of Guangx rescue cars that fell into the mud along with the dam. Under the idlers, removing everything on the phones, the remnants of the plate break through. Saving them now.

In the city of Tundao in Hunan Province, where the Tung Dynasty lives, tourists can no longer look at anything – only on the water. Under it, all the first floors and bridges disappeared.

One of the largest karst caves in the world is closed. But even without it, throughout the south of China – continuous frightening spectacles, Niagara Falls.

“At first I regretted that I was not allowed into the cave, and then I realized how lucky I was to see such a rare phenomenon,” says one local resident.

Downpours then subsiding, then gaining strength – especially violently in the southern provinces from June 22. Only in Hunan more than 80 victims. Such a tragic scale floods have not been there for 60 years. People drown and perish under landslides and debris of houses.

From this five-story building in Tibet all managed to withdraw. It tumbled into the river, tearing the wires. Water draws everything with it – with ease even freight wagons. How many people lost their homes, they say only approximately, but it is obvious that the speech is about tens of thousands.

In the central provinces, in the east and west – another anomaly: a wave of unbearable heat. Almost heat stroke in Beijing – today and on the eve of here at 40 degrees. In Siani, the other day recorded a plus 50. The heat will be replaced by showers tomorrow, which means there will be a threat of new floods. Summer always experiences China’s strength.