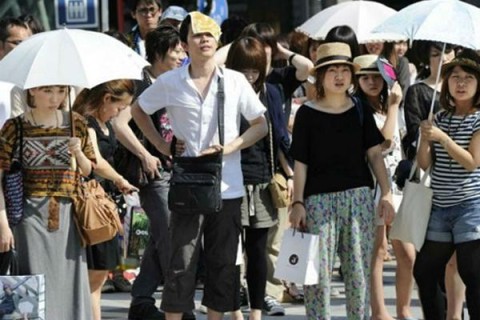 In Japan last week were hospitalized with heat strokes at least 2847 people, of whom six died. This was reported by the Main fire control of the country, which performs functions of the Ministry of emergency situations and ambulance.

According to the Agency, in comparison with the middle of June the number of victims because of the heat tripled. Only since the end of April in the country’s hospitals were hit with a heat stroke about 9 thousand people.

Over the weekend the hot weather established in almost all areas of Japan, reports TASS. In some regions in the Central part of the country daytime temperatures exceed 38 degrees Celsius. Doctors urge people not to stay long in the sun, to wear hats and drink more liquid.

Japan meteorological administration this year expects an abnormally hot summer due to the effects of climatic phenomena El niño and La niña in the Pacific ocean. As expected, the peak will be in late July — early August.

Last year in Japan died because of the heat, more than 100 people, and 53 thousands of residents were hospitalized.