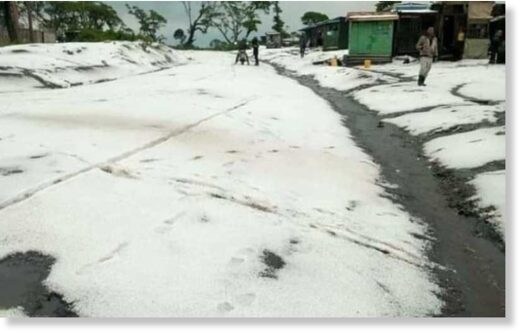 Residents of Olokurto, Melili, Enaibelbel and Kishiriri in northern Narok woke up in an ice-covered area after heavy hail hit the area and left in its wake.

The hail, which had not yet melted almost 12 hours later, destroyed crops of wheat, potatoes and maize, causing huge losses to farmers.

“It started as normal rains around 6:00 pm on Sunday, but hail began to hit our roof at night. In the morning we were shocked to find ice everywhere, ”said John Ole Pezi, resident of Olokurto Parish.

He said he was more devastated when he inspected his 10-acre potato farm and found that the entire crop had been destroyed.

Ole Pesi said: “All the potatoes have just turned into bare stems. Without leaves! This is a huge loss for me because without leaves it means zero production. ”

Another farmer, Wilson Carbolo of Melili, is also desperate after his 16 acre wheat plantation, which was almost ready to harvest, was destroyed.

The residents were not spared the frost, and many of them wrapped themselves in blankets to keep warm to survive.

The county meteorologist said the hailstones were two to five centimeters in diameter.