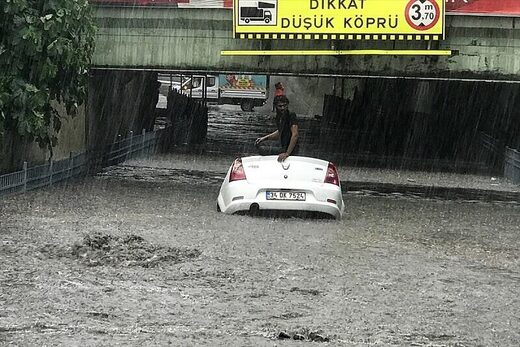 A sudden downpour disrupted life in Istanbul, flooding homes and stores. The rains hit the European and Asian sides of the city, and pedestrians tried to take shelter at bus stops and under store shelters.

Locals rushed to clear water from stores and ground-floor residences in Esenyurt, a working-class neighborhood in the far west of Istanbul, while motorists waded knee-deep in water to access main roads in Bayrampasa and Fatih, two neighborhoods in the city center.

Some locals made efforts to clear clogged drains until firefighters arrived to help lower the water level in the Güzelürt area of Esenyurt.

In Bayrampas, the road connecting the city to the TEM highway was flooded and the driver sitting on the roof of the flooded car jumped into the water and was able to get out to the safe side of the road. After the rain briefly subsided, passersby rushed to the aid of the stranded driver and pushed his car to safety.

The floods also turned the waters in some parts of the Sea of Marmara brown as mud flowed into the sea.

Crews from Istanbul’s city municipality were dispatched to flooded areas to help pump out the water and deliver aid to citizens affected by the flooding.

Meanwhile, meteorologists have warned that heavier rainfall is expected in the coming days during the week.