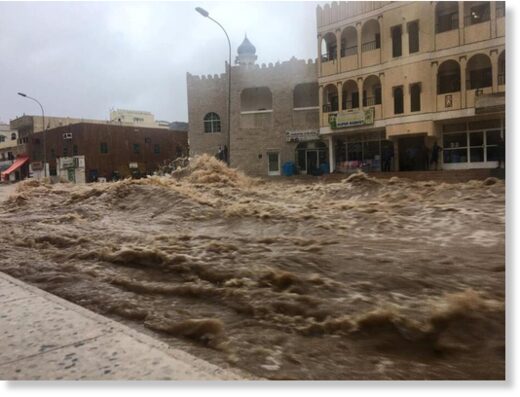 The Oman Meteorological Office reported that seasonal rains are expected in the next few days.

The floods have dampened the mood for the Eid holiday.

“This time I will not celebrate Eid because part of my house is damaged. The windows were blown out by the strong winds. The front door is hanging on its hinges, my garden is torn up, all the flower pots are broken. It will cost me hundreds of rials to repair,” Khalifa Al Subhi, 66, from Nizwa in the Al Dakhlia region, told The National.

Other Omanis said it was a “double blow” to their plans to celebrate Eid, which had already been marred by the extended lockdown.

“We haven’t even gotten over the disappointment of being shut down for the Eid celebration, and now the heavy rains that have damaged our property. What else can we do?” said Hamed Al Badri, 47, of Saham in the Al Batinah region.

“This is going to be the worst Eid I can remember, it can’t get any worse.”

The flooding caused widespread power outages, forcing some people to flee their homes.

More than 15 towns in three regions suffered power outages, and about 20 had to be evacuated, Oman Television reported.

“The wadis overflowed and my house was completely surrounded by water. I called emergency numbers and the police evacuated me and my family to safety. We are now living in my brother’s house until the flooding subsides. I really hope we can return to our home on the first day of Eid,” said Salah Al Breiki, 43.

Others said they are waiting for the power to resume.

The Ministry of Electricity and Water Resources said most of the power outages have already been fixed, and the remaining outages should be restored by Friday morning.

“At the moment, we have no power. We’re waiting for them to reconnect the power.” Several lampposts were uprooted, causing complete darkness in the streets last night,” said Abdulrahman Al Harhi, a 52-year-old resident of Barqa. “What’s worse, my car is stuck in the mud and the roads are flooded. Now we can’t even go to the store to get groceries,” he added.

Oman TV reported that 55 people across the country are being treated in hospitals with injuries from the rains and floods.