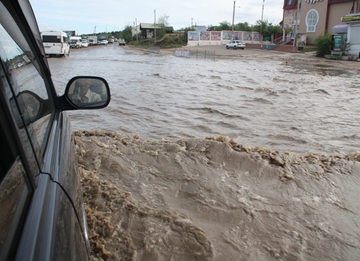 Power cheats introduced a state of “high alert” because of the fallen last night of a two-month norm of precipitation, the press service of the city hall.

The report notes that in the second half of Monday on the territory of the city district fell to 86 mm of precipitation at a monthly rate of 59 mm.

“It turns out that for half of the day fell nearly two norm of precipitation. This, of course, could not pass without consequences. There have been flooding and washouts of streets and roads cheats, flooding homes private residential sector, cooperative, and vegetable gardens. Heavy rainfall led to the disruption of the systems energy and water supply”, – quotes the press service of the chief of a municipal government on Affairs GO and CHS Gennady Komarov

According to the press service, during the night, the main efforts were aimed at helping people. All Chita caught in a difficult situation, proposed the evacuation to temporary shelters on the basis of secondary school №9, in which were placed four people, and the rest of the evacuation refused.

Registered violations in the work of the nine water supply and sanitation, All of this happened because of a power outage. At 5:00 local time, the work of almost all objects were restored with the exception of four wells at pumping station No. 14. They were connected later.

From the power supply was disconnected residential areas. Emergency crews of power engineers worked through the night.

At the moment the priority is to work with the population. Identified new locations of flooding. Organized in accordance with the schedule of works for pumping water using equipment of OAO “Vodokanal – Chita” and PJSC “TGC-14”.

Powers of Committee of municipal economy of a city administration together with the municipal enterprises DMRS and “upgrading” a survey of the roads. When problems are emergency work.