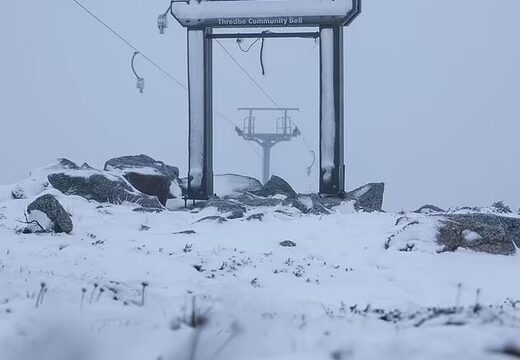 A “snowstorm” hit Australian ski resorts more than a month earlier than skiers and snowboarders in the country expected.

Temperatures dropped to nearly 0C on Tuesday night, bringing a heavy downpour of snow and sleet to the snowy mountains of New South Wales overnight.

The ski resorts of Tredbo and Perisher received 10 cm of snow only at village level, while the snow was much deeper at the tops of the slopes.

Snowfall in mid-May is rare in the region, but it’s a good sign for those hoping to get up on skis when the snow season starts in June.

Snow can fall when temperatures are just above freezing because it takes time to melt as it gets through a shallow layer of warmer air,” said Weatherzone meteorologist Ben Domencino.

Temperatures have dropped to near freezing, but even colder weather will result in heavy snowfall in the snowy mountains of New South Wales over the weekend.

Experts are predicting that a strong system will move through the area over the weekend, which could lead to another heavy snowfall.

Although the snow that fell in May will likely melt long before the traditional June season begins, it is encouraging that it may start earlier this year.

The Bureau of Meteorology predicts maximum temperatures of 2C in the Perisher Valley on Friday, to -3C on Saturday and -6C on Sunday.

Only 5 mm of precipitation is forecast, but that will be enough to bring snowfall across the area, which could last into Tuesday with similar temperatures.

Temperatures will dip below 10C over the weekend in Sydney, Melbourne, Adelaide and Hobart.

In Canberra, downtown temperatures could drop to -4C on Sunday as a cold front passes through the nation’s capital.