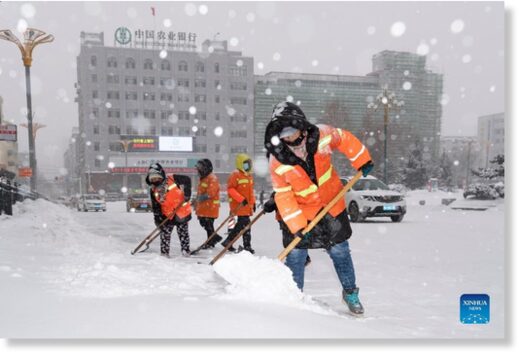 Heavy snowfall and blizzards have hit China’s northeastern provinces amid a wave of cold across the country.

Snowfall in Heilongjiang and Jilin provinces entered its most active phase on Monday and is forecast to continue through Wednesday, even as the cold wave shows signs of abating.

Snowstorms raged in parts of Heilongjiang that felt like “razor blades slicing into your face,” according to online users.

Schools and kindergartens were temporarily closed in Harbin, Jilin and other cities in the province, but some were expected to reopen Wednesday.

Twenty-two highways in Heilongjiang were closed and flights were cancelled. Local authorities employed more than 4,200 people to clear 9,950 kilometers of roads of snow.

The amount of snow during this period reached a record high in some places in Heilongjiang. In the eastern city of Jiamusi, snow cover reached 42 centimeters.

The Heilongjiang provincial government issued a level II warning for emergency response to weather disasters, the second highest in the four-level warning system.