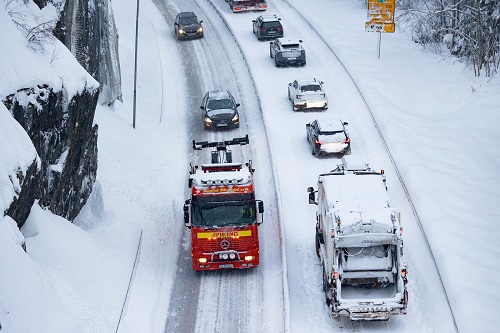 A train stop caused kilometer-long queues on the E18 highway in Tvedestrand on Tuesday. More than 2,500 cars were involved in the chaos, and evacuations will be held tonight. Many have been stuck in their cars for more than ten hours.

Agder police said last night that they had resources around traffic jams on E18, which ended in complete chaos and long lines as the storm hit east Agder.

Various measures are now being developed to eliminate the queues.

Just after midnight, an NRK reporter on the scene reports that there is some traffic in one lane.

– We are beginning to get a better understanding of the situation. Up to 2,500 cars may be involved in the traffic jam. That’s a lot, and we have to understand that the work will take time. For that reason, we are working with Civil Defense to get blankets, hot drinks and food for those affected, says Police Chief Kjerstin Askholt at 1:15.

She says the plan is to work in parallel with opening the floodgates on the road to take the oncoming lane to turn some of the traffic around.

As a result of the traffic chaos, police have deployed crisis personnel.

In preparation for evacuating people who have been stuck in their cars for many hours, the police have also set up an evacuation center.

The center is located at Langsæveien 10 in Arendal in Philadelphia Parish.

Electric car drivers are starting to run out of power, according to NRK.

Agder County Police Chief Kjerstin Askholt told VG that they will be at the front of the line when the evacuation begins.

– We want to get people out who can’t get out on their own, she said.

Stay as warm as possible.
Help each other and keep each other warm.
If you’re cold in a car that’s out of fuel/electricity, see if there’s a hot car nearby that has room for you.
If your car is about to run out of fuel, try to pull away if possible.
Keep your car radio on so you can keep up with the latest news.