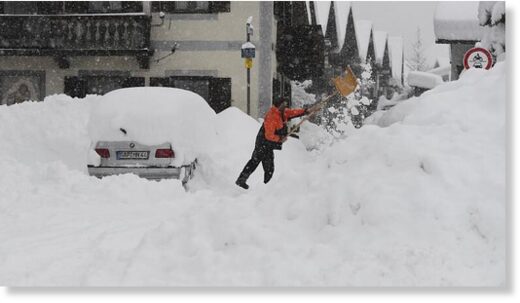 Due to low temperatures, the rails in Poland are splitting, snow covers most of the Turkish city of Istanbul.

Over the weekend and on Monday, January 18, most of Turkey was at the mercy of a cyclone in the eastern Mediterranean.

In parts of Poland, temperatures dropped to -28C, and many trains were delayed Monday as rails cracked at two Warsaw train stations.

The cold prompted an increase in coal burning. Air pollution levels in Warsaw were so high that city officials urged people to stay indoors.

Just outside Poland’s southwestern border, temperatures in the Czech Republic have dropped below minus 20 ° C in many places.

According to the Czech Hydrometeorological Institute, the coldest temperature, -27 ° C, was recorded on Monday in Orlička-Zahori, a mountain village 160 km east of Prague and near the border with Poland.

The frost is expected to give way to heavy snowfall in the north-east of the Czech Republic, the institute said.

In Albania, temperatures dropped to -13 ° C in Peshkopi, 110 km east of the capital Tirana. Because of the cold, it became dangerous to drive, and firefighters in Pogradec were unable to drive up to the fire site in time to save a person’s life.

On Sunday in Switzerland, three skiers were killed by an avalanche. One man was able to free himself from the snow and help another. A third man was taken to hospital in critical condition and later died.

Authorities said one person also died on Saturday in the French Alps due to an avalanche, while several others survived by being buried in the snow. Heavy snowfall, “made the snow cover very unstable.”

Météo France reported that the country’s average temperature for the first two weeks of January was 3.09 ° C, almost 2 ° C below the January average.