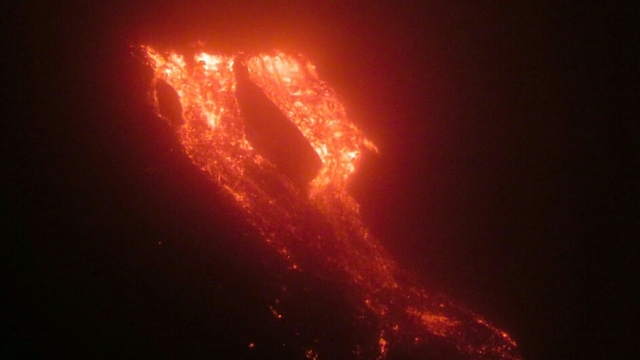 The volcano of Etna on the Italian island of Sicily erupted lava and ashes for almost three months and is still uneasy. After the eruption on March 16 lava began to flow down the slopes.

This video was filmed two days later. The fiery stream flows from a height, glinting with embers in the pitch darkness.

Frames fascinate! However, it is better to admire such a spectacle from afar, keeping at a safe distance from the fire-breathing mountain. For example, last week, the burning lava of Etna, flowing down to the foot, led to an explosion when it hit the cold snow. As a result, about 10 people were injured. Hot stones and steam fell on tourists, journalists and scientists, while they tried to escape from the volcanic storm.

In the eastern Sicilian city of Catania, because of the thick clouds of volcanic ash, the airport did not work. By Saturday, flights have resumed, according to the Associated Press.