How forest fires change the USA in the XXI century 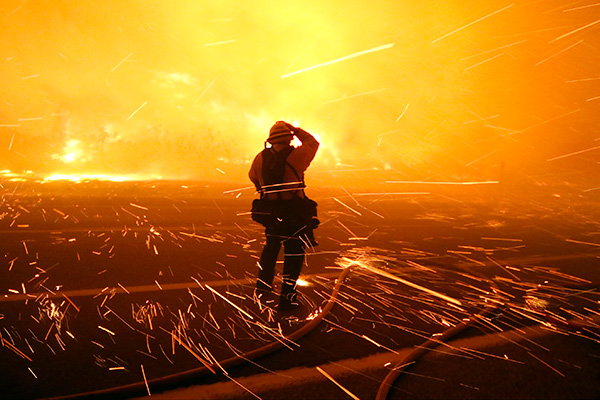 The constant increase of temperature and severe droughts resulting from global warming, according to scientists, is threatened by large fires for the most vulnerable of the Western United States. About the research the American climate scientists says.<url>.

The fire originated about 420 million years ago, simultaneously with the appearance of the first land plants developed. The spread of the fire was regulated by natural causes, but in the XVIII century the frequency of fires in the Northern hemisphere has increased dramatically due to human activity.

Methods of dealing with forest fires mankind has developed in the early twentieth century. This helped to reduce their number and to protect the infrastructure of the settlements. However, despite current efforts, anthropogenic climate change leads to a threatening increase in the number and extent of burning forests.

Recent studies have shown that in the US most affected forests in Western part of the country. The average annual temperature in this part of the country by the end of XXI century will be higher by one to eight degrees Celsius — this prediction follows from the simulation of climate changes in the moderate emission scenario developed by the intergovernmental panel on climate change of the United Nations. The scenario assumes that the dry season lasts longer than at present, and will be accompanied by a decrease in rainfall. This, in turn, will increase the season of forest fires. Some studies show that these processes have already begun in the Western United States.

Modern methods of fire fighting in conjunction with active agricultural expansion person in the West not only reduced the incidence of major forest fires, but also led to the change of the forest structure. As a result, for example, forest soil has accumulated large amounts of biomass.

The inventory of charcoal and climate models NASA show that since 1920, the global frequency of forest fires throughout the U.S. have decreased. The reason for this is to change land use practices. The downward trend in the frequency of occurrence of fires in the first half of the twentieth century is valid for the West of the country. According to the annual reports of the US Forest service, the area of fires decreased by 50 percent since the beginning of the 1900’s to the 1960-ies. However, existing climate models predict that this trend is unlikely to continue until the end of the XXI century. Anthropogenic climate change by 2100 will lead to a rise in global average temperatures, droughts and fires.

The growing temperature for one to eight degrees Celsius in the Western United States, including the Rocky and Cascade mountains, the Columbia and the snake river plateau, the summer season in these areas will be hotter and drier. Long periods of drought and high temperatures can potentially lead to a decrease in rainfall in the winter season. In many regions West of the country is already quite dry climate, and the main source of water is snowmelt in late spring and early summer. The increase in temperature will lead to early snowmelt and, consequently, increase the duration of drought and the season of forest fires. Over the next decade, the number of large fires continue to fall before you grow up by the end of the XXI century. However, some studies show that increasing the frequency of fires has begun already in some Western areas of the USA, especially in California, due to prolonged periods of drought. 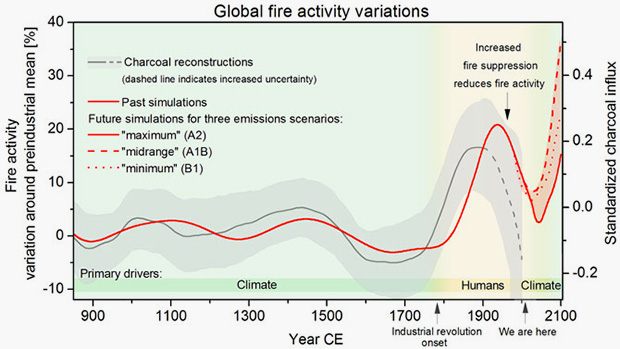 Modeling frequency of occurrence of fires over the last Millennium

Study Philip Dennison of the University of Utah showed that the frequency of large fires in seven of the nine ecoregions of the Western countries from 1984 to 2012 has increased. The U.S. forest service also noted a General increase in the number of victims of the fire areas in the West of the country. In the beginning of 2016 forest fires in the West of the country demonstrate record scale. In the previous year was burnt out of 40.5 thousand square kilometers of territories. Thus was set a record in the modern history of the United States. One of the largest fires of 2015 occurred in the County of Okanogan (Washington), where he burned more than 1.2 thousand square kilometers of land.

Other studies confirm that the upward trend of fires in the West is greatly enhanced. Scientists led by Anthony Westerling University of California, Merced, showed that years of high frequency of fires confidently correlate with the periods of early spring snowmelt. Surveillance experts indicate that global warming is already having a noticeable impact on the situation with fires in the Western United States. Scientists presented the study shows that the average duration of the season of forest fires in the period from 1987 to 2003 was 64 per cent (74 days) more than in the period from 1970 to 1986. The risk of fires increases dramatically in areas with early snowmelt. Ultimately, the study of Westerling shows that the frequency of occurrence of forest fires in the Western United States has passed its minimum in the last century and at the present time, there is a tendency to growth before the end of the XXI century. 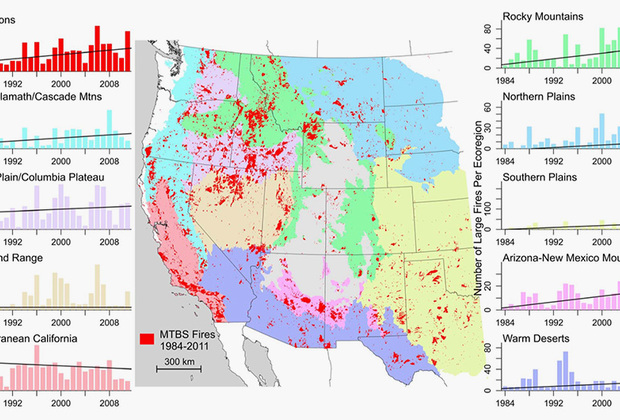 Frequent forest fires in the Western United States will have a significant impact not only on human life but also on the ecological situation in the region and the world. Recent studies show that forests in the Western U.S. absorb 20-40 percent of carbon dioxide emissions in the country. In the case of growth in the number of forest fires and biomass burning will release large amounts of carbon dioxide and translate this region of the United States from the category of consumers of carbon dioxide to its producers. This will make the fight against global warming even more difficult.

Fires can also affect air quality in nearby areas. With the smoke for miles transferred small particles consisting of precursors for ozone formation, which adversely affect the respiratory, cardiovascular and immune system. This, together with the predicted population growth and negative changes in natural habitat conditions can not change the quality of life in the Western United States.