How many hurricanes can exist simultaneously on the same territory? 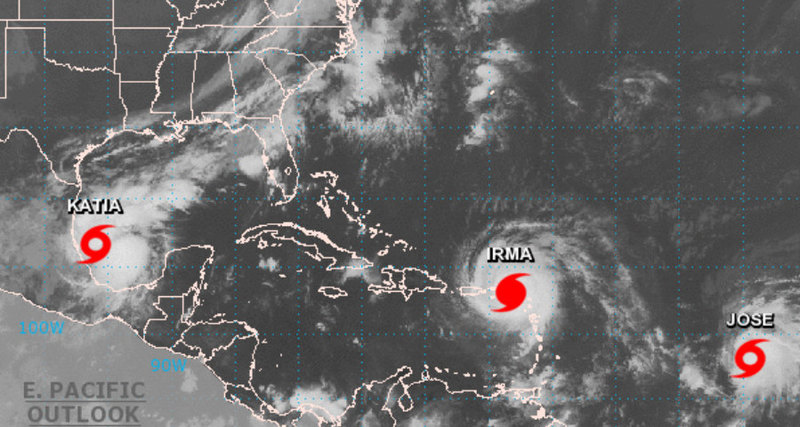 Last week satellites recorded an extremely terrible picture. Hurricane Irma was smashing the coast of Florida. Hurricane “Katya” struck a blow on the Mexican coast, and hurricane “Jose” is waiting for its turn. Willy-nilly you wonder, but how many hurricanes in general can exist simultaneously in such a limited territory?

For the emergence of a tropical hurricane, two key factors are needed. First, we need a significant difference between the temperature at the surface of the Earth and the air temperature in the troposphere. Secondly, we need the so-called “grains” of hurricanes, ordinary storms, which under the right conditions turn into hurricanes. Typically, such low pressure systems are located at a distance of a couple of thousand kilometers, that is, the space for the formation of hurricanes is limited. Hence the question of how many such “grains” can be found in the Atlantic Ocean in a separate period of time, and how many of them can grow into a hurricane?

Using the database of the National Oceanic and Atmospheric Administration, which contains data since 1851, Dr. Anand Gnadesikan, climatologist, found that at any time when there was a tropical cyclone in the Atlantic, there was a 20% chance of another “grain” which could grow in a cyclone. The chances that there is a third, is 20% of the already existing twenty. This declining trend suggests that the current situation with three cyclones is recorded in only 4% of the data, but many of the recorded cyclones have never reached the land.

Since 1851, only 340 cases have been recorded, when four or more cyclones operated simultaneously – less than 1%. Only 9 cases were recorded during the entire time of observations, when in the Atlantic at the same time there were 6 cyclones.

Taking into account the conditions for the formation of hurricanes, it can be assumed that there can be seven hurricanes simultaneously in the Atlantic Ocean, and this is in the worst case, although there is actually much more space for them. But the question is not in space. The question is the number of “grains”.