How the Italian earthquakes are connected among themselves? 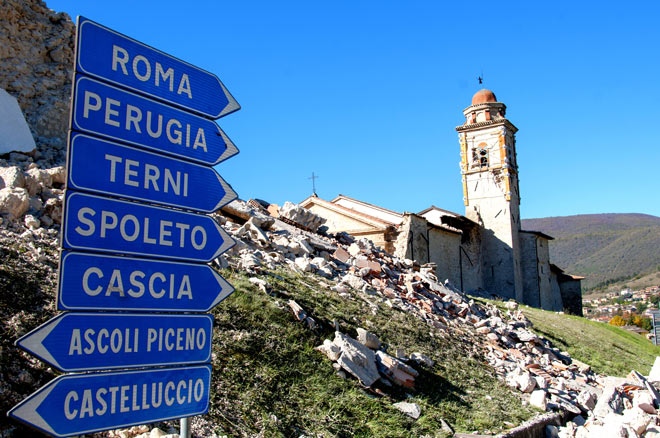 A series of earthquakes shook the central Italy for the last months, having destroyed the medieval cities and buildings, churches and sights. The penultimate seismoevent — measuring 6,6 — struck a number of historical mountain towns and became the most powerful earthquake in Italy in thirty years. It occurred when the region didn’t recover from killing August tremors when 300 people died.

How these earthquakes are connected? May they foretell stronger tremors?

Scientists study communication between seismoevents which took place on tectonic breaks in the Apennines.

Aftershocks tend to become less powerful and frequent over time. Not all earthquakes have harbingers, but moderate and strong earthquakes are almost always followed by a series of aftershocks.

Scientists can’t define in advance to what type the earthquake until it occurs belongs.

The Italian earthquakes are still investigated, but, most likely, seismoevents, including August, were harbingers of an earthquake measuring 6,6 which occurred on last days off, the seismologist of Geological service of the USA Paul Earl says.

Though the earthquake was the strongest in a series, the victims weren’t as people moved to shelters because of the previous pushes. Earl considers that the probability that in the region there will be even more powerful earthquake, is low.

Nevertheless the main push can sometimes become an earthquake harbinger.
Some days before nuclear catastrophe on the NPP “Fukushima-1” in Japan several strong earthquakes, measuring up to 7,3, shook the region. Was considered that the main push already behind until the coast of Japan was struck by a seismic wave measuring 9.

Aftershocks can proceed in the days, in the weeks and even in the years depending on force of the main push.