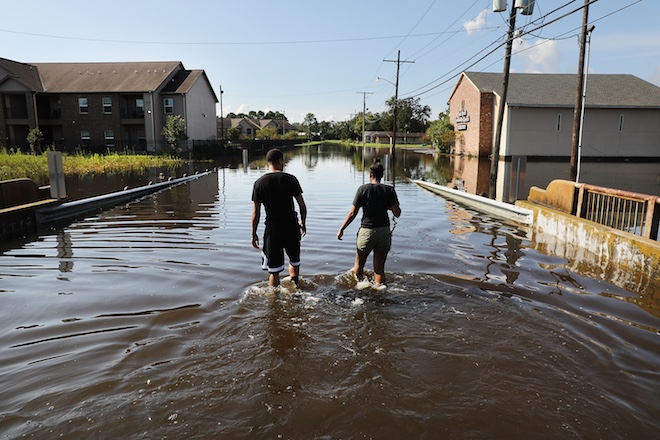 Scientists have weighed the water that the hurricane Harvey shed on Texas in August.

The researchers calculated by measuring the pressure exerted on Earth that the fourth category hurricane watered the region with 127 billion tons of water. “I was asked how much this is in the stadiums. This is 26 thousand Orleans Superdums (it accommodates almost 74.5 thousand people), “says Adrian Borsa of the Scripps Oceanographic Institute (USA).

“Harvey”, “Irma” and “Maria” raced through the states of the Gulf of Mexico the US and the Caribbean, which led to large-scale floods, human casualties and destruction. “Harvey” devastated part of the coast of Texas, as it stopped, concentrating floods in a very narrow region. This is one of the strongest precipitation in the entire history of hurricanes recorded.

Standard rain meters measured up to 1270 mm of precipitation. But Dr. Borsa tried to more broadly assess the scale of “Harvey” showers and find out how much the Earth has bent, reacting to the weight of the water. A network of high-precision GPS stations registered a vertical displacement of the soil. “It’s like if you’re sitting on a mattress – it’s shrinking; when you rise, he rises back. The Earth behaves like a rubber cushion. ”

The American Meteorological Association reported on three extreme weather events that would not have occurred without the impact of climate change caused by man. This is a record global temperature in 2016; The heat wave in Asia in 2016 and the high ocean temperature recorded near the coast of Alaska. These events occurred because “we created a new climate,” says climatologist Stephanie Herring of the National Oceanic and Atmospheric Administration.

The report also says that other heat waves around the world have become more intense due to climate change and that arctic warming was “most likely” impossible without it. Coral bleaching in the Great Barrier Reef and other marine ecosystems in the Pacific has also been exacerbated by anthropogenic warming of the ocean.