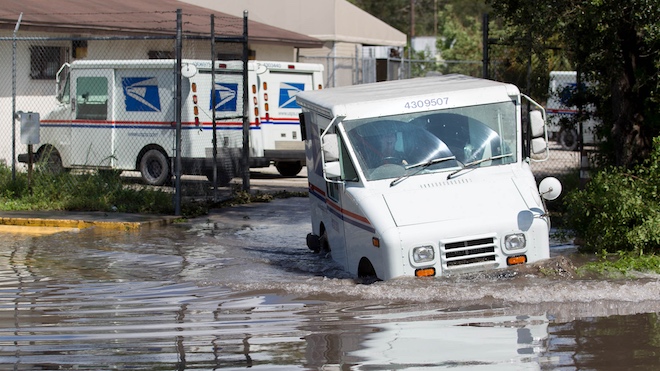 One of the most dangerous consequences of a major hurricane is storm surges – a kind of temporary localized sea level rise caused by strong wind and low atmospheric pressure. The storm surge made the tropical cyclones “Sandy” and “Katrina” the most destructive and deadly in US history.

What is this phenomenon? Hurricane, which possesses great strength, takes billions of liters of water from one place and carries it away for hundreds of kilometers. Consequently, somewhere the water disappears, and somewhere it becomes abundant, which can lead to flooding. Over the weekend, such hurricane pranks could be observed in Florida, when the Irma passed through the Florida Strait, connecting the Gulf of Mexico and the Atlantic Ocean.

On Saturday, a Twitter user, under the nickname @kaydie_k, posted a video from the Bahamas, which shows a huge desert plain on the site where the ocean used to be.

I am in disbelief right now… This is Long Island, Bahamas and the ocean water is missing!!! That's as far as they see #HurricaneIrma wtf pic.twitter.com/AhPAonjO6s

“I do not believe my eyes … It’s the island of Long Island, Bahamas, and there’s no water here!”

The video shows a real phenomenon, and it was not limited to the islands. Soon the beaches on the peninsula of Florida began to receive reports of a strange sight. In Naples, and then in Tampa Bay, people described the staggeringly low sea level. In Sarasota, the manatees were thrown ashore at low tide.

#Tampa bay now an effective dog park as we wait for #irma. With @CityofTampa parks closed ahead of storm, this is the best we&#39;ve got. pic.twitter.com/Op3FADmL3V

What makes the seas to wane? Incredibly low pressure “Irma” literally draws water from the ocean to the center of the storm and takes it with them. Imagine a hurricane as a huge engine that takes energy and water from the seas and air and displaces it like rain and wind. Here is a real example of how this happens.

All this water does not disappear – it moves after the wall of the eye of the hurricane, the line of superstrong storms that surround the calm center.

On Sunday afternoon, the National Meteorological Service announced the urgent evacuation of the inhabitants of Fort Myers and Naples in connection with the draining of the seabed. “This is an extremely life-threatening situation,” the document said.

Taylor Trogdon from the National Hurricane Center said the warning was released in an attempt to convey the gravity of the impending storm surge.