Hurricanes in 2017 on animation from NASA 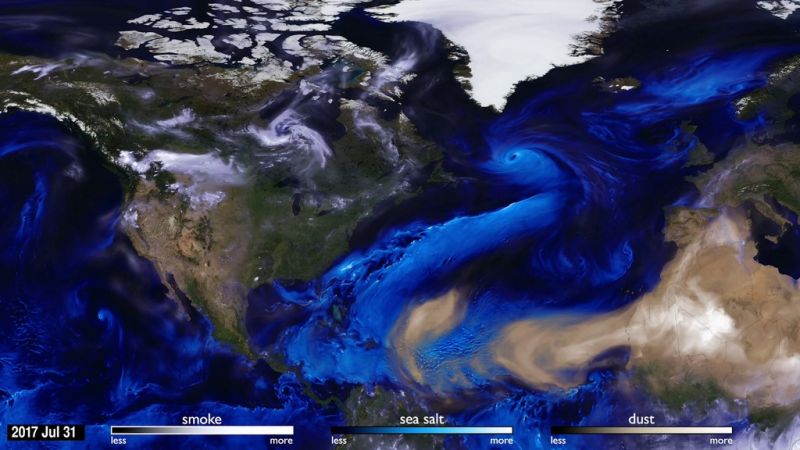 The hurricane season of this year is exceptional in all senses: it was one of the most disastrous, rainy and animated. “Harvey” shed an unprecedented amount of rain in Houston in August, the “Irma” winds became the strongest that was ever recorded in the Atlantic, and “Ophelia” caused strange weather phenomena in the west of Europe.

It is easy to see the damage caused by destructive hurricanes, but the changing atmospheric currents that cause the formation of weather systems, it is more difficult to visualize.

A new simulation published by NASA shows how it is possible to track these changes in the atmosphere if one observes aerosol particles suspended in the atmosphere. From July 31 to August 1, NASA scientists monitored tiny particles of smoke, sea salt and dust aerosols as they drifted across the Atlantic Ocean. Mathematical models created by the Earth observation system demonstrate how these aerosols move. If they are applied to satellite images of a similar period, scientists can better see the physical processes that lead to super-storms.

Visualization NASA first shows the hurricane “Harvey” during its formation in late August right above the northern coast of South America. As the storm grows and the salt particles concentrate, it can be seen in the form of a bright blue cluster that moves to the northern coast of the Gulf of Mexico.

By the beginning of September, as soon as Harvey had dispersed, the Irma began to form along the west coast of Africa. Bright blue salt concentration accumulated in the center of the coast and mixed with aerosol particles of brown dust from the Sahara desert.

Although the smoke from the destructive forest fires of the US did not directly affect the hurricanes of this season, it is clear how the veil spreads throughout the Atlantic Ocean.

By the end of September, hurricanes “Maria” and “Jose” are starting to form.

The last hurricane shown on the simulation is Ophelia, which was formed in the east of the Atlantic and followed an unusual north-eastern trajectory. The storm became a sensation after spreading dust from the Sahara desert over western Europe, creating red “Martian” skies above London. Visualization shows how “Ophelia” captures dust on its way and carries it to the north.

The atmospheric conditions that are required for hurricanes to form are fairly well known. They are fed by warm sea water above 26.6 degrees Celsius, as well as low wind shear. The weather phenomena of La Niña and El Niño, which affect the temperature of the ocean, also affect the intensity of the hurricane season. Understanding atmospheric phenomena will help scientists predict changes in other regions of the world.