Scientists at the USGS Hawaii Volcano Observatory are tracking changes at Mauna Loa, the world’s largest volcano. The volcano is not currently erupting, but since July 2019 there have been signs of increased activity above known background activity, at which time HVO raised the volcano alert level to ADVISORY and the aviation color code to YELLOW.

The geological record shows that Mauna Loa erupts on average every seven years. However, it has been 37 years since lava flows from the northeastern rift zone of the volcano approached Hilo at a distance of 7 km. Nevertheless, Mauna Loa will undoubtedly erupt again at some point, so extensive observations by the Hawaii Volcano Observatory (HVO) of the U.S. Geological Survey have continued for decades.

The recent changes in deformation and seismicity at Mauna Loa are the latest in a series of “wake-up signs” that began in 2004. At that time, Global Positioning System (GPS) instruments showed a bulging reservoir system at the top of the volcano, accompanied by very deep earthquakes.

This behavior continued for several months, after which Mauna Loa returned to its background state. The summit inflation began again in 2014, this time along with shallow earthquakes, and has continued since then, with only a brief interruption in 2018.

In the past six months, there has been an increase in earthquake activity on the western flank of Mauna Loa and changes in the deformation patterns at its summit. These changes are small, but may indicate that the magmatic system is evolving in important directions. 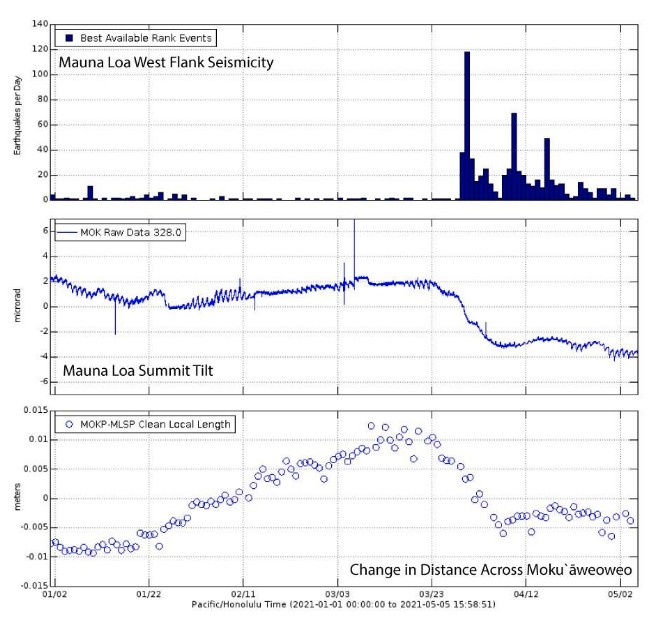 Three observations made in the last few months are particularly interesting:

First, since October 2020, the direction of deformation at the summit of Mauna Loa has reversed twice, switching from external (expansive) to internal (contractive) direction.

The last episode of compression reduced the distance across the caldera of the summit of Mauna Loa (Mokuʻāweoweo) by only 1.5 cm.

This is insignificant compared to the amount of expansion that occurred, but the sudden reversal is new behavior that has not been observed on Mauna Loa with modern instruments.

The second observation was a small, shallow M3.2 earthquake in Mokuʻāweoweo on March 6.

Using satellite radar, HVO was able to see that the earthquake caused a subsidence of nearly 10 cm in a small part of the caldera.

This is very unusual for a 3.2 magnitude earthquake and indicates that the fault may have slipped all the way to the ground surface.

The third observation is the smallest, but perhaps the most significant.

Beginning on March 23, a tiltmeter near the summit of Mauna Loa recorded a change in inclination of about 5 microradians. It is not unusual to see such a large tilt on Kilauea, but there has never before been a tilt signal that could be attributed to changes in the Mauna Loa volcanic system.

Tilt changes on Mauna Loa have been observed due to daily or seasonal temperature changes and due to precipitation, but have never before been associated with volcanic deformation.

These new observations are interesting because they suggest some of the deformation is driven by shallower processes than we have seen in the past several years. Because this is the first time HVO has observed this level of detail, it is difficult to know what the data might indicate about the volcano’s future.

Mauna Loa may become quiet again and return to background, like it did in 2005, or it may not.

HVO scientists said they expect that there will be additional indicators, such as increased gas emissions and a sustained increase in seismicity, before any future eruption.

These recent observations remind us that Mauna Loa is a restless volcano and they are part of why HVO encourages everyone to think about how a Mauna Loa eruption might affect them and plan accordingly.