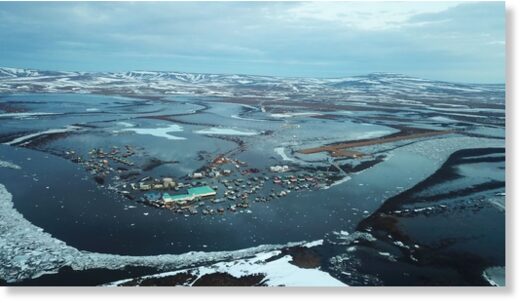 Ice jams formed on the Buckland River about a half-mile downstream from a village of more than 400 people, said Jeremy Zidek, a spokesman for the state Division of Homeland Security and Emergency Management.

Floodwaters had reached most homes in the village, but had not yet penetrated homes by noon Thursday, Zidek said. Utilities have not yet been affected, he said.

People from two families evacuated their homes to stay with others in different parts of the village, but Zidek said village officials said no evacuations were necessary at this time.

The road to the airport was flooded, with the runway still above water.

Buckland has regular flooding, but community members say this is the worst flooding in years. The village sits along the riverbank on low, flat land about 120 kilometers southeast of Kotzebue.

“This is a community that prepares for flooding every spring. … In this case, they said they were surprised at how quickly the water rose,” Zidek said. “I don’t think they were expecting this development.”

Kaiden Ikitkirak Tickett said the normal spring flooding only affects uptown Buckland, so his family was surprised when the water started coming into the downtown area where they live. The 18-year-old was helping his family tie up their belongings in the yard, hoping their property wouldn’t get swept away.

The water rushed in so fast that they didn’t have time to move their snowmobiles to higher ground, and according to Ikitkirak Tikett, they are now submerged in water.

On Thursday, he watched as his neighbors in boats and canoes paddled through the village.

“It’s not something you see every day. It’s pretty weird,” he said. “There’s a lot of stuff and trash floating around.”

Bessie Hadley, who lives in upper Buckland, said she quickly moved her truck and snowmobile to higher ground. By the time she walked back to her house, having parked the truck, the water was so high that it flooded her boots.

As the water continued to rise, large chunks of ice flowed into the village, hitting the walls of some houses, Hadley said.

The weather service issued a flood warning Thursday that will remain in effect until Saturday. It was not immediately clear when the flooding might subside.

“Water levels are expected to remain high and fluctuate up and down until the ice jam in the lower reaches dissipates,” the warning said.