Ice swirling in the sea of Labrador 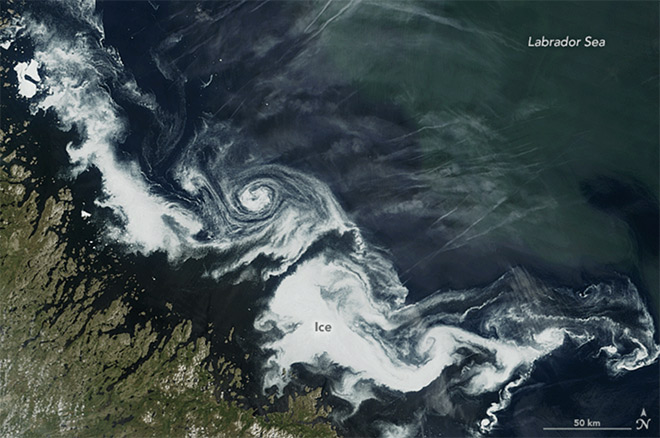 When the pilot Jeff Davis noticed from a height of about 11 kilometers something similar to the formation of the cyclone, did not realize that this, taking initially for the storm. The Spectroradiometer MODIS on NASA satellites Terra and Aqua captured this whirlpool of ice near the canadian coast of Labrador.

“I’ve never seen anything like it,” he said. “At first glance I thought it was a hurricane a low pressure system, but then I realized it was not clouds, and the surface of the ice. It was a rare spectacle.”

Davis, who piloted a transatlantic flight for 16 years, for the first time witnessed such a phenomenon. Walter Meyer, the specialist for NASA’s cryosphere, explained that to ensure its visibility from a height of cruise flight, a clear sky and the same water temperature and air.

“First of all, the observer must be at the right time in the right place at the cloudless sky. If the vortex is too small or compact, you will not see will not see, if the ice is too thick or if it melts. Not much time passes between these two extremes”.

When the ice melts, it breaks into pieces, as the crushing for a cocktail. Then sea currents, moving these pieces of ice, forming a vortex, in appearance resembling a cyclone. This happens both in the spring when the ice thaws and autumn, when ice begins to freeze. However, even in this time of such a vortex is not formed if there are certain conditions: sufficient warm water to break ice into fragments, but cold enough to remain frozen.

While the opportunity to observe this spin appears to be rare due to frequent cloud cover over the Arctic seas, Mayer notes that ice whirlpools are a fairly common phenomenon. These formations can be large (several hundred kilometers in diameter) or small (few hundred meters). The ice in these eddies can reach several meters in width, which creates a danger to ships.